PM Erdoğan: Syria has still not implemented the six-item plan 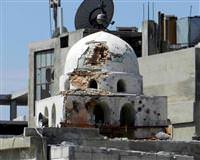 After over a year of continuous violence, Syria has now entered its second day of a ceasefire foreseeing the silencing of weapons.

The United Nations has focused efforts on sending a U.N. truce-monitoring force to ensure the fragile ceasefire does not collapse. Meanwhile, Syria has announced that they will accept U.N. monitors.


Diplomats on the 15-nation council met behind closed doors to discuss a U.S.-drafted resolution to authorize an initial deployment of up to 30 unarmed observers to Syria. All U.N. Security representatives are in support of the expedited transfer of observers to Syria and hope to reach an agreement on a text they could vote on before end of the day.

Kofi Annan, the joint U.N.-Arab League envoy, told the council earlier on Thursday that Syria has not fully complied with his six-point peace plan and called for the swift deployment of a U.N. observer force to the country.

Annan noted that Assad has not withdrawn entirely and emphasized that Syrian troops and armor must return to their barracks immediately.

U.N. Secretary General Ban Ki-moon expressed that he was observing with suspicion, because the administration has failed to keep promises in the past. Ban also stated that they want to send at least 200 observers, however an initial 30-member group of monitors may be in Syria by the start of next week.

Clinton: Assad has to go…

"Assad will have to go and the Syrian people must be given the chance to chart their own future," U.S. Secretary of State Hillary Clinton said. Adding that this would just be the first step, Clinton requested that full access be allowed to humanity-based organizations.

Clinton also stated that the U.S. was in favor of the initial committee monitors being sent immediately and stated that they must be granted complete freedom of movement, communication and to be allowed to go anywhere they want in the country to talk with Syrians.

The ceasefire, which is the key factor in the Annan plan, began yesterday at six a.m. local time.
Information has surfaced that both sides have at times broken the ceasefire.

According to opposition groups, 20 people have been killed throughout the day in a variety of locations throughout Syria, while the government has announced that one soldier was killed and over 20 wounded in a bomb attack in Aleppo.

Syrian opposition groups called mass protests for Friday. Russia's U.N. Ambassador Vitaly Churkin expressed concern this may result in provocation and stated, "We are apprehensive of the calls for mass protests, this is exactly the opposite of what e need right now."

Turkey, which has opened its doors to 24,000 refugees in the past 13-months of ongoing conflict, states that Syria is not following the Annan plan.

Prime Minister Recep Tayyip Erdoğan states, 'Is this six-item plan being enforced at present or not? I am of the opinion that it is not being enforced."

Erdoğan is scheduled to meet with the Riyadh administration in Saudi Arabia to discuss developments.
According to U.N. estimations, nine thousand people have been killed in Syria since March of last year when demonstration first began against Bashar Assad. In February, the Syrian government announced that 3,838 people had died 2,493 which were civilians and 1,345 security forces.