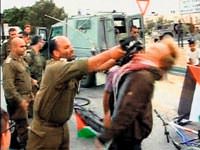 The Danish activist was taking part in a peaceful demonstration for Palestine when he was struck in the face with a gun by a senior officer sending him to the hospital. The Israeli military was forced to suspend the officer once footage of the incident was released on the internet.

The video showed Lieutenant-Colonel Shalom Eisner holding his M-16 rifle in both hands and shouting at a group of demonstrators taking part in a bicycle rally in the occupied West Bank, before suddenly striking a man in the face. The demonstrator, a Danish national, fell to the ground and was carried away by activists. The protester, named Andreas Ias, was treated in a Palestinian hospital. The incident took place on Saturday as a 250-persin group was crossing peacefully by bicycle from the West Bank to the Jordan valley in a campaign to protest Israeli occupation of Palestinian territory, entitled "Welcome to Palestine."

"We were just walking slowly towards the soldiers; we were chanting Palestinian songs calling for the liberation of Palestine. I don't believe that is a provocation," he told Israel's Channel 10 television.
The footage aired on Sunday shortly after which Colonel Esiner was suspended Israeli Prime Minister Benjamin Netanyahu condemned the officer's actions. "This behavior is not characteristic of IDF (Israel Defense Forces) soldiers and commanders and it has no place in the IDF or in the state of Israel," a statement from Netanyahu's office said of the incident.

However, harsh preventative measures had been taken by Israel in an attempt to prevent the activists' arrival, including the cancellation of a number of activists flights. Upon their arrival to Tel Aviv's Ben Gurion Airport, Israel continued attempts to prevent their entry into the country.