Murderer of the century vomits hatred in hearing 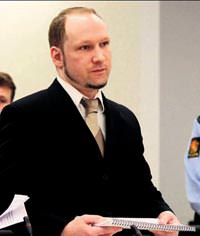 Breivik, on trial in Norway for the murder of 77 people, continued to make a show of himself during yesterday’s defense by stating that he was proud of those in Germany who have killed Turks.

The second day of the Norwegian trial of extreme rightist Anders Behring Breivik, who massacred 77 people last July, was extremely eventful as the mass-murderer continued to use the courtroom to make a show of himself and preach his racist propaganda.

Breivik entered the court yesterday smirking before flashing a clenched-fist salute. He then proceeded to stare grinning at the relative's of the victims. Breivik then read a prepared statement in which the self-confessed killer expounded for over an hour on the threat of Islam, Europe's multicultural "hell" and why he shot dozens of teenagers last July on an island retreat.

"The attacks on July 22 were a preventive strike. I acted in self-defense on behalf of my people, my city, my country," he stated. "I therefore demand to be found innocent of the present charges." Calling his massacre the most 'spectacular' attack by a nationalist militant since World War II, Breivic said that those he murdered were not innocent. He also said that he would do it again. "July 22, wasn't about me. July 22 was a suicide attack. I wasn't expecting to survive that day," says Breivic who goes on to explain that the Knights of Templar exists and there are two other additional extreme rightist cells that are planning to stage attacks."

In his defense, Breivik went on to state that he felt pride for those extreme-rightist Germans who have killed Turks. The reading of Breivik's prepared statement, which he insisted on continuing despite repeated warnings issued from the judge due to its length, was in essence a summary of the 1,500-page manifesto he posted online before the attacks and was not broadcasted live in order to prevent it being made into propaganda.

Meanwhile, receptionist Thomas Indrebö, who was serving as a lay judge on the case, was dismissed and replaced yesterday due to the finding that he had written that the 33-year-old Breivik deserved the death penalty on his Facebook account following the attack which could supposedly be construed as a lack of impartiality.

Norway's legal system includes the position of lay judges, which consist of ordinary citizens which have the same weight in verdicts as professional magistrates. Norway also does not execute the death penalty and the maximum time served in the country is 21 years. If found mentally sane, which is basically the key issue in the trial which is expected to last for ten weeks, Breivik will be sentenced with 21 years, otherwise he will be placed in a mental institution.