No news yet on missing journalists in Syria 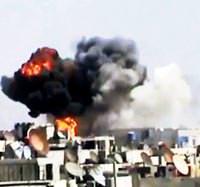 Syria’s Foreign Affairs Ministry Spokesman Jihad Makdissi announced that they do not know the whereabouts of the two Turkish journalists that went missing 40 days ago and stated that if they locate them they will send them to Turkey immediately.

In an exclusive interview on a Haber, Syria's Foreign Affairs Ministry Spokesman Jihad Makdissi explained that they are still searching for Adem Özköse and Hamit Coşkun, two Turkish journalists that went missing 40 days ago. Contrary to news that surfaced in the media stating that the two Turkish journalists were in the Syrian government's custody, Makdissi states, "We have absolutely no intentions of using the journalists for any sort of gain. If we find them we will send them to Turkey."


Makdissi went on to explain that as the government they are trying to abide by the ceasefire; however there are still ongoing attacks staged against the regime's forces. According to Makdissi, a solution must be reached through dialogue and political means. Emphasizing that the exit route will be established through gathering around a table, Makdissi states, "The door remains open for this. Disarming the streets is a step that could bring an end to this crisis. The Syrian government has given their promise. We request neighboring countries, especially Turkey and the gulf nations to comply with the peace and to sit at the table with us in order to formulate a political solution. Syria needs this," says Makdissi.

'BE A PART OF THE SOLUTION'

Makdissi went on to explain that they want to have strong relations with Turkey, and states "What we want is for Turkey to be a part of the solution. Syria's need is for change and not an armed revolution. We want the Turkish government to play a constructive role in this transformation."
Foreign Affairs Minister Ahmet Davutoğlu will be attending the Syria meeting held in Paris on Thursday.

The Atlantic Cruiser, a ship purported to be delivering weapons to Syria from Iran has been moored at the İskenderun Port on Wednesday. Despite the announced ceasefire, violence still continues in Syria. According to Human Rights Watch, artillery fire continues by the Syrian army in Homs where 22 people, including six soldiers have died. The initial U.N. monitor group is also currently in Homs. Meanwhile, Syrian Foreign Affairs Minister Walid Muallem has headed for China, one of the nation's biggest supporters.