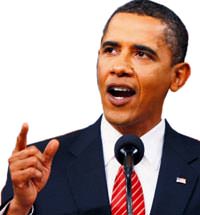 U.S. President Obama refrained from using the term ‘genocide’ during his address in remembrance of the victims from the incidents that transpired in 1915.

Ceremonies were held in the Armenian capital of Yerevan to commemorate the events that transpired in 1915 on April 24th, the day Armenian's have specifically designated for remembrance. During an address at the official ceremony in the capital, Armenian President Serzh Sargsyan stated, "2015 commemorates not only the 100th anniversary of the Armenian Genocide; it will also commemorate the anniversary of our memory and our resolve to live for thousands of years more."

U.S. President Barack Obama continued his tradition of refraining from referring to the incident as genocide and instead used the Armenian term 'Meds Yeghern' which translates to 'Great Disaster'.
He also called for "a full, frank, and just acknowledgement of the facts" about the history, saying that "moving forward with the future cannot be done without reckoning with the facts of the past."

'WE HONOR THE MEMORY'
During his annual April 24th address Obama stated: "We honor the memory of the 1.5 million Armenians who were brutally massacred or marched to their deaths in the waning days of the Ottoman Empire. A full, frank and just acknowledgement of the facts is to everyone's benefit. Moving forward with the future cannot be done without reckoning with the facts of the past."