A new Middle East is born 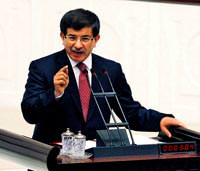 Foreign Affairs Minister Ahmet Davutoğlu states that a new Middle East is about to be born and Turkey will be the pioneers of this era.

Addressing Turkey's Grand National Assembly in a special session devoted to Syria, Foreign Affairs Minister Ahmet Davutoğlu expressed that Turkey will be the pioneers of a new period about to be embarked on in the Middle East. "We will direct the winds of change. We have a vision of a new Middle East and Turkey will lead this new order of peace."

Minister Davutoğlu also criticized the opposition's support of the Baath regime and stated that the era of 'stand-in's is over. The AK Party has abandoned the traditional 'wait and see' policy, states Davutoğlu who went on to say that the era of being dragged behind large forces and being part of the agenda of others is over.

"Turkey is a central nation in its region. It does what befalls it and will continue to do so. Dealing with Syria is not a matter of choice, it is an obligation. Whatever talks are held on Syria from here on out, will be held where we are present. We will be involved in any steps taken in regards to Syria's future," states Davutoğlu. The Foreign Minister went on to say that there is a price for friendship with Turkey and they will take back the hand that they extended in friendship to the hand of the Assad administration upon seeing the blood of the innocent.

Minister Davutoğlu also stated that throughout the world Turkey is known for being 'mighty and majestic', "Go to Somalia, go to Uzbekistan, Bosnia or Libya and ask them if we are powerful or weak. History is what will prove our power."