PM Erdoğan to discuss Syria with Putin and Obama 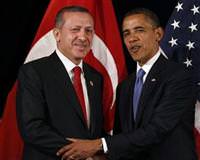 While in Mexico to attend the G-20 summit, Prime Minister Recep Tayyip Erdoğan will be meeting with Russian President Vladimir Putin today and with U.S. President Barack Obama tomorrow.

Prime Minister Erdoğan departed by private plane (ANA) for Mexico last night. Upon his arrival to Los Cabos Airport, the Prime Minister was greeted by Human Rights Deputy Undersecretary Juan Manuel Gomez Rodrigo, Turkey's Ambassador to Mexico Ali Ahmet Acet as well as a number of other officials. Prime Minister Erdoğan is joined by Foreign Affairs Minister Ahmet Davutoğlu and Minister of Finance Mehmet Şimşek on his trip to Mexico.