Barzani calls on the PKK to end conflict 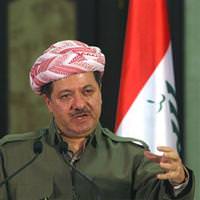 Commenting on the recent terrorist attack in Hakkari, Barzani stated, “I want this war to stop as soon as possible. I condemn it. The era of war and using weapons is over.”

President of the Iraqi Kurdistan Region Massoud Barzani spoke out against the recent attack staged by the PKK in Turkey by stating, "I want this war to stop as soon as possible. I condemn this event. In the end they will only suffer bloodshed. We need to have respect for one another."

In reference to the attack staged by the PKK on Tuesday in Dağlıca, Hakkari in which eight Turkish soldiers were killed, Barzani stated, ''What happened yesterday has deeply saddened us. We are truly very upset about this incident. The era of war and using weapons is now over."