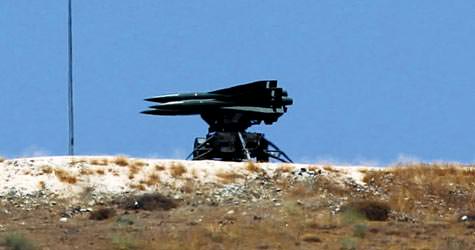 The escalating tension between Syria and Turkey since Syria downed a Turkish fighter jet is now on the rise as military forces pile up on both sides of the border. While Turkey has rotated its missiles in Syria’s direction, Syria has deployed 170 tanks along the border.

Tension has been on the rise between the neighboring nations since Syria downed a Turkish fighter jet last week.

Immediately following an announcement made by Prime Minister Recep Tayyip Erdoğan, military troops, missile shields and heavy weaponry have been positioned along the border near Hatay. While military troops continue to be deployed to Hatay, the stringer missiles set up two years ago have now been rotated towards Syria. Meanwhile, the number of Hawk missiles has been brought up from three to five.

Land Forces Commander Hayri Kıvrıkoğlu inspected the Gaziantep 5th Armored Brigade, the first troops to be sent out in any extraordinary situation. Legions in İskenderun and Osmaniye are also on 24-hour alarm in the case of any emergency situation.

SYRIA SENDS 170 TANKS TO THE BORDER

Meanwhile, information has been obtained that Syria has deployed 170 tanks and 2,500 soldiers along the Aleppo border. A general in the rebel Free Syria Army said on Friday that Syrian government forces had amassed around 170 tanks north of the city Aleppo, 25 kilometers' distance from the Turkish border.
General Mustafa al-Sheikh, head of the Higher Military Council, an association of senior officers who defected from President Bashar al-Assad's forces, says there are two possible reasons for the deployment. They're either preparing to move to the border to counter the Turkish deployment or attack the rebellious (Syrian) towns and villages in and around the border zone north of Aleppo." Sheikh stated.
According to allegations, in the case of any sort of conflict with Syria, Saudi Arabia has deployed missiles, tanks and special troops along the Jordan and Iraqi borders. According to the Arab Press, a commander from Iran's Revolutionary Guard, has placed short-range missiles on ships deployed to the Strait of Hormuz.

Conflict between Syrian State Leader Bashar Assad's regime and the opposition continued to rage yesterday. Syrian activists have announced that army troops committed yet another massacre in the Douma suburb of Damascus yesterday. Supposedly, the Syrian military used heavy weaponry, including tanks and cannons to kill 48, including women and children.

RUSSIA: WE MAY REACH COMMON GROUND

The situation in Syria will be discussed on Saturday in Geneva at an international ministerial meeting that will bring together foreign affairs ministers from nine different nations as well as the EU Foreign Affairs High Representation and the UN Secretary General. Russian Foreign Minister Sergei Lavrov and U.S. Secretary of State Hillary Clinton met in St. Petersburg, Russia, on Friday night where they had the chance to discuss Syria. Russia said after talks with the United States that there was a chance of world powers finding common ground at a crisis meeting on Syria on Saturday, with Lavrov stating, "We have a very good chance to find common ground at the conference in Geneva tomorrow," in regards to all sides approving of Annan's plan. Lavrov also mentioned that they felt there was a chance the United States may alter their position on the Syria situation.

According to the Debkafile website, known for its affiliation with Israel's secret service Mossad, Bashar Assad and his family are not being allowed to leave the palace. Supposedly solely Assad is allowed to go outside and only by permission granted from the Republican guard.