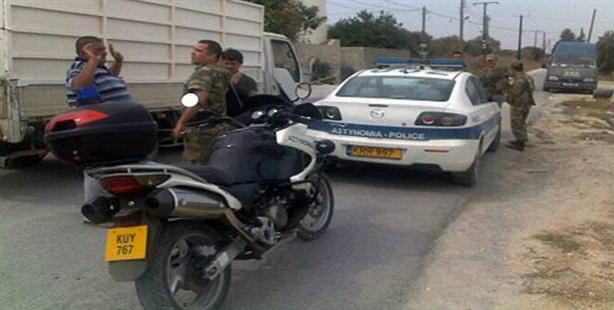 Turkish Republic of Northern Cyprus security forces have detained three Greek Cypriot police officers who violated the border in pursuit of a young Turkish Cypriot, who refused to stop at a control point.

The event transpired the day before yesterday, when a Turkish Cypriot licensed truck did not stop as ordered by Greek Cypriot traffic police officers at a control point located between Nicosia and Larnaka. Three Greek Cypriot officers chased the 19 year-old Greek Cypriot Coşkun Alaslan into his village. Stopping Alaslan in front of his home, the Greek Cypriot police proceeded to handcuff him and made him lay on the ground. Local villagers came to Alaslan's aid, followed by Turkish soldiers which in turn arrested the Greek police officers, taking them to the Nicosia Police Headquarters. Alaslan's sister, who was attacked by the Greek Cypriot police when she tried to help her brother, explains that the Turkish soldiers saved them.

Commenting on the incident, Turkish Republic of Northern Cyprus President Derviş Eroğlu emphasizes that Northern Cyprus is a seperate state and therefore it is entirely natural that anyone who violates its borders, even if they are Greek Cypriot police officers, should be taken to court. "Not only did they violate a military zone, but they also entered the Turkish region carrying weapons and attacked people in our own country. This is of course a state of law, therefore under these conditions, in which Greek Cyprus is an entirely different state, even if the perpetrator happens to be a police officer, the unauthorized entry into our land or military zone is an issue that should naturally be handled in court," states Eroğlu.