They are destroying the sacred city of Aleppo 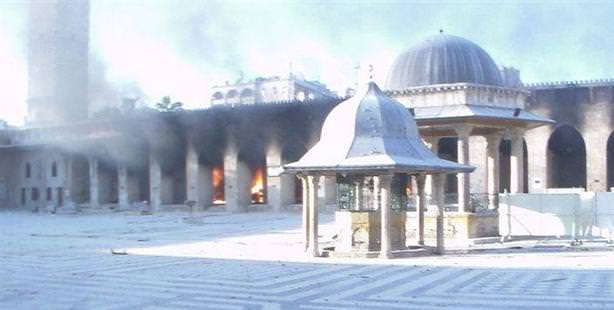 Syrian forces loyal to Assad bombarded the historical Great Mosque of Aleppo where the opposition has been holding guard. As the uprising’s latest victim, the Umayyad Mosque (Great Mosque of Aleppo) has incurred great harm due its strategic positioning leaving it center to the fighting.

Aleppo's Great Mosque, which dates back to the 8th century, was badly damaged in fighting between government forces and rebels battling for control of the Old City. Firing brought on by Syrian regime soldiers trying to infiltrate the Umayyad Mosque, which the opposition had taken over, has resulted in serious damage being incurred to the city's great landmark. In broadcasted videos and photographs the mosque's medieval arches were charred, its elaborate wooden panels smashed and metal filigree lanterns lay broken in the courtyard.

"The army has expelled the armed groups from the Umayyad mosque," a rebel military official told an AFP journalist at the scene in Aleppo. The Syrian Observatory for Human Rights confirmed the reports.
The London-based Syrian Observatory for Human Rights reaffirmed that regime forces had regained control of the mosque after intense clashes led opposition forces to withdraw from the mosque. "Regime forces have managed to retake control of the Omayyad Mosque, following fierce clashes against rebel fighters around the mosque and the withdrawal of the rebel groups," the group said.

Spokesman for the Revolutionary Council in Aleppo Abu Firas told AFP, "The army was using the mosque as a base, because of its strategic location in the center of the Old City. They were prohibiting people from going to pray there," he added. "The Free Syrian Army had specific orders not to open fire inside the mosque."

As soon as the regime forces regained power over the Umayyad Mosque, on Monday Syrian President Bashar Assad ordered immediate repairs to the Great Mosque in Aleppo. The repairs are expected to be completed by the end of 2013 and to begin with the forming of a damage control commission that will begin working immediately.

This announcement has widely been considered as being an official affirmation of the regime's control over the mosque and its surroundings.

The Umayyad Mosque, which was built in the beginning of the 8th century, also houses the remains of Zechariah, the father of John the Baptist, a central figure in the Christian religion. In 1986, UNESCO declared the Old City of Aleppo as a World Heritage Site. Aleppo was also selected as "Islamic Capital of Culture" in 2006.

The massacre of history that is transpiring in Syria was not restricted to the damage incurred by the mosque as portions of its medieval marketplace burned in September, about a month into the battle for the city.