For Syrians its either death or escape 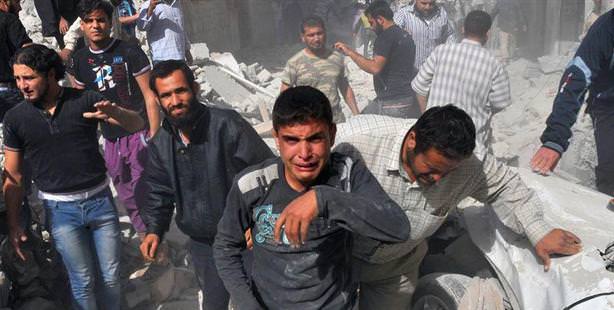 The Assad regime is providing two options alone for its citizens; either death or escape. While 150,000 Syrian have left Idlib alone, yesterday 44 people were killed in an air attack on Maarrat Al Numan.

Despite the international reaction, the Bashar Assad administration continues to rain bombs on the people of Syria. For Syrians, the only route to escape the bombing is to abandon their homes. According to Ahmed Kassum Director of the Syrian Regime Crimes Documenting Bureau, the number of Syrian refugees from Idlib alone has reached 150,000.

Explaining that those forced to emigrate are unable to receive any outside help and that the remaining local public's help is limited as they are under bombardment, Kassum states, "The winter season is approaching, which will make it more difficult for those trying to flee." The Syrian military continue to stage attacks on the innocent public yesterday, with at least 150 killed in operations. The bloodiest attack of yesterday took place in Maarrat Al Numan, where the opposition has taken over control yet the regime has staged continuous airstrikes leaving nothing standing.

According to initial findings, 44 people were killed in yesterday's strike; however bodies are still being pulled out from under the rubble, which means that this number could double at the very least. Witnesses stated that TNT-filled barrels were thrown on their homes. Meanwhile, it has been announced that over 3,000 children have been killed in the 19-month uprising.

A number of towns in Syria are now divided into fronts, with the opposition trying to fend off assaults from the Syrian regime's advanced technology military. Witnesses say Assad forces continue to bomb regardless of the target.

A CEASEFIRE FOR EID AL-ADHA

UN and Arab League Special Envoy to Syria Lakhdar Brahimi's proposal for a ceasefire to be announced in Syria during the upcoming Eid al-Adha continues to gain favor, with Turkey, Egypt, Iran and Saudi Arabia expected to announce their official support. Secretary-General of the Organisation of Islamic Cooperation Dr. Ekmeleddin İhsanoğlu has also announced they want there to be a ceasefire in Syria during the upcoming holiday. Brahimi was scheduled to arrive in Syria today to discuss the proposal.