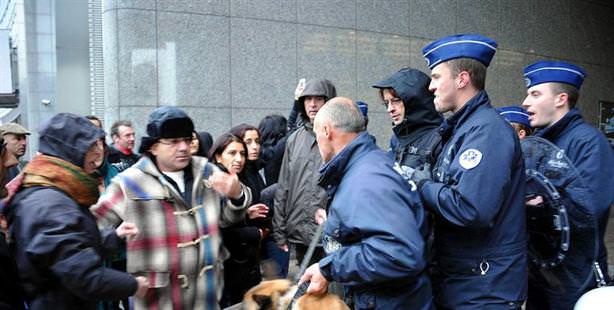 Police in Brussels had to disperse a crowd of PKK sympathizers attempting to stage a sit-in protest in Luxembourg Square, located in front of the European Parliament in an attempt to demand the release of hundreds of prisoners in Turkey that are currently staging a hunger strike.

The demonstrators, which gathered in front of the European parliament on Monday, launched a sit-in, even setting up tents, urging the European parliament to act in regards to a hunger strike staged by hundreds of inmates in Turkey. Police were forced to intervene, when demonstrators attacked them with stones and sticks upon their request they disperse. Security forces had to use tear gas to contain the approximately 200-strong group in mayhem which lasted for approximately half an hour, Two demonstrators were arrested.

The protestors were requesting those engaged in a hunger strike for over a month now be released from prison. Hundreds of inmates have been staging a hunger strike in order to demand the release of imprisoned PKK leader Abdullah Öcalan, the right to education in Kurdish language and the use of Kurdish in Turkish courts.