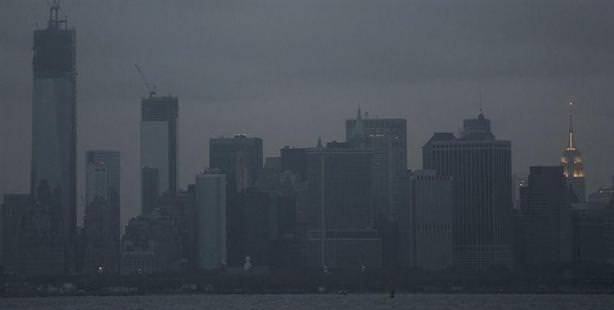 The northeastern United States battled epic flood waters and lengthy power outages on Tuesday after the massive storm Sandy pummeled the coast with a record storm surge, high winds and heavy rains that killed at least 45 people and caused billion of dollars in losses.

Millions of people in New York City and other hard-hit areas will spend days or weeks recovering from a storm already seen as far more destructive that Hurricane Irene, which slammed into the same region a year ago. One disaster modeling company said Sandy may have caused up to $15 billion in insured losses.

The storm killed 18 people in New York City, among 23 total in New York state, while six died in New Jersey. Seven other states reported fatalities. Some 8.2 million homes and businesses in several states were without electricity as trees toppled by Sandy's fierce winds took down power lines.

Sandy hit the coast with a week to go to the Nov. 6 presidential election and turned its fury inland with heavy snowfall, dampening an unprecedented drive to encourage early voting and raising questions whether some polling stations will be ready to open on Election Day.

New York City will struggle without its subway system, which was inundated and will remain shut for days. Much of the Wall Street district was left underwater but officials hoped to have financial markets reopen on Wednesday.

Sandy was the biggest storm to hit the country in generations when it crashed ashore with hurricane-force winds on Monday near the New Jersey gambling resort of Atlantic City, devastating the Jersey Shore tourist haven. Flood waters lifted parked cars and deposited them on an otherwise deserted highway.


"It's total devastation down there. There are boats in the street five blocks from the ocean," said Peter Sandomeno, an owner of the Broadway Court Motel in Point Pleasant Beach, New Jersey.

Christie, who has been a strong supporter of Republican presidential challenger Mitt Romney, praised Obama and the federal response to the storm. Obama and Romney put campaigning on hold for a second day but Romney planned to hit the trail again in Florida on Wednesday and Obama seemed likely to resume campaigning on Thursday for a final five-day sprint to Election Day.

Obama faces political danger if the government fails to respond well, as was the case with predecessor George W. Bush's botched handling of Hurricane Katrina in 2005. Obama has a chance to show that his administration has learned the lessons of Katrina and that he can lead during a crisis.

Sandy brought a record storm surge of almost 14 feet (4.2 meters) to downtown Manhattan, well above the previous record of 10 feet (3 meters) during Hurricane Donna in 1960, the National Weather Service said.

The storm forced New York City to postpone its traditional Halloween parade, which had been set for Wednesday night in Greenwich Village and threatened to disrupt Sunday's New York City marathon.

The lower half of Manhattan went dark when surging seawater flooded a substation and as power utility Consolidated Edison shut down others pre-emptively. Some 250,000 customers lost power.

Fire ravaged the Breezy Point neighborhood in the borough of Queens, destroying 110 homes and damaging 20 while destroying still more in the nearby neighborhood of Belle Harbor. Remarkably, no fatalities were reported.

"To describe it as looking like pictures we've seen of the end of World War Two is not overstating it," New York Mayor Michael Bloomberg said after touring the area. "The area was completely leveled. Chimneys and foundations were all that was left of many of these homes."

Hospitals closed throughout the region, forcing patients to relocate and doctors to carry premature babies down more than a dozen flights of stairs at one New York City facility.

While some parts of the city went unscathed, neighborhoods along the East and Hudson rivers bordering Manhattan were underwater and expected to be without power for days, as were low-lying streets in Battery Park near Ground Zero, where the World Trade Center stood before the Sept. 11, 2001, attacks.

"I'm lucky to have gas; I can make hot water. But there is no heating and I'm all cold inside," said Thea Lucas, 87, who lives alone in Manhattan's Lower East Side.

Cellphone service went silent in many states and some emergency call centers were affected.

Some cities like Washington, Philadelphia and Boston were mostly spared but the storm reached as far inland as Ohio and parts of West Virginia were buried under 3 feet (1 meter) of snow, a boon for ski resorts that was one of the storm's few bright spots.

The western extreme of Sandy's wind field buffeted the Great Lakes region, according to Andrew Krein of the National Weather Service, generating wind gusts of up to 60 mph (96 kph) on the southern end of Lake Michigan and up to 35 mph (56 kph) Chicago.

In Cleveland, buildings in the city's downtown area were evacuated due to flooding, police said. Winds gusting to 50 mph (80 kph) brought down wires and knocked out power to homes and business. City officials asked residents to stay inside and for downtown businesses to remained closed for the day.