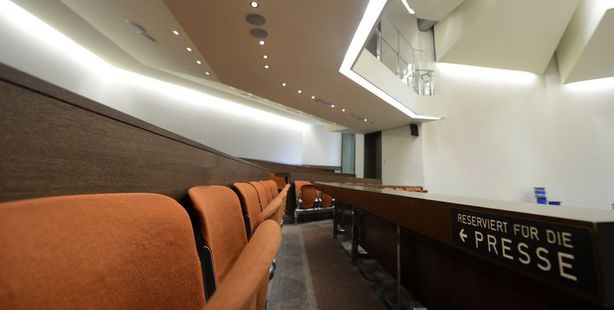 SABAH newspaper has made the top agenda in the German press after shedding light to the fact that Turkish journalists were not being reserved seats in a German court to witness the “Case of the Century” in which the perpetrators of the so-called “Döner Murders” will soon go on trial.

On April 17th, the remaining living members of the National Socialist Underground (NSU) Neo-Nazi terrorist organization will face trial for murdering ten immigrants, eight of which were Turkish. Due to restricted seating, not a single member of the Turkish press was able to be accredited to attend the trial. SABAH Europe is now taking the issue itself to the German Constitutional Court.

SABAH Europe has acquired the support of the German public in their pursuit to seek legal measures due to the fact that not a single Turkish reporter was amongst the 50 accredited press members to witness a trial for the biggest serial murder case since World War II. SABAH Europe is now being represented by one of Germany's most prominent media attorneys Prof. Dr. Ralf Höcker to contest the decision made by the Bavarian Courthouse. Four lawyers who work in Höcker's office joined SABAH Europe administrators to work on completing an application to the Federal Constitutional Court to contest the lack of accreditation by the April 5th midnight deadline, which they made just three minutes shy.

A FIRST IN THE HISTORY OF GERMAN MEDIA

Despite the mainstream opinion floating in the German press that Turkish journalists should absolutely be allowed to witness this pertinent trial, the court continues to abide by its original ruling, which has opened the floodgates to widespread debate on the issue in Germany. SABAH's application to the Federal Constitutional Court is a historical first for German media. There has never been a case filed by another newspaper for not being allowed to enter a courtroom and as a result the German public is widely anticipating what the outcome will be. Television stations ZDF, ARD and RTL as well as newspapers, Spiegel, Focus, Die Welt, Frankfurter Allgemeine Zeitung, Süddeutsche Zeitung and Bild have all reported on SABAH Europe's case filing and have widely quoted authorities from the newspaper.

A RACE TO ACCREDITATION

It all goes back to an announcement made that accreditation for the controversial trial being held in the Munich High Administrative Court would be issued between the dates of March 5 and 14. SABAH Europe Editor-in-Chief İsmail Erel and SABAH Munich Correspondent Rahmi Turan applied for accreditation on March 6th. The court's press release however never stated or issued any sort of warning that accreditation would only be issued to the first 50 people who applied. Then of course there is the fact that the mentioning of March 14th as a cut-off date insinuates that those who apply up until that time would be eligible for accreditation. A number of German journalists found out on March 4th that only the initial applicants would be able to get through and therefore they went ahead and applied early in the morning on March 5th. Newspapers that did not have close relations with the court were not given this crucial information. The court went ahead and evaluated applications by 500 reporters, including those from SABAH Europe and chose to accredit only 50, none of which were from a Turkish press organ. A number of German press members kindly offered their accreditation to Turkish journalists, however this practice was then denied.

WAS IT DONE UNDER STATE KNOWLEDGE?

The neo-Nazi National Socialist Underground committed ten murders, eight of which were Turks that were based on racist motives. The terrorist organization was unexpectedly revealed in 2011 in a double suicide by members Uwe Mundlos and Uwe Böhnhardt. The third suspect in the case Beate Zschaepe was apprehended and an investigation into the case has been going on for nearly a year. The names of both a member of the national intelligence organization as well as an informant have surfaced in connected to the NSU which has led to serious speculation as to whether the systematic murders were conducted in full knowledge of the state.

This is a translation of an article originally written by Mikdat Karalioğlu.