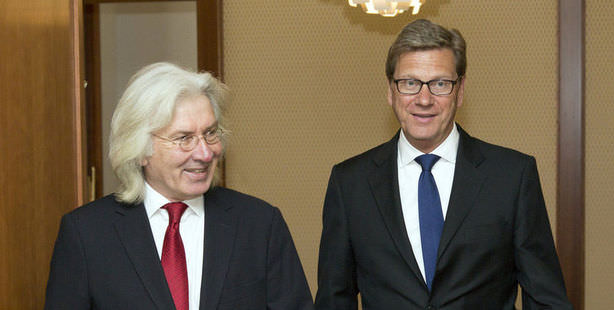 Just one week ahead of the start of a trial for a series of racist murders, Germany has uncovered a Neo-Nazi network operating in prisons throughout the country and communicating through coded messages.

Just a week prior to the start of the trial in Germany on the National Socialist Underground (NSU) terrorist cell responsible for killing ten people, eight of which were Turks in what was commonly referred to as the 'döner murders', authorities have uncovered a secret Neo-Nazi network that has been operating in prisons throughout the country.

Authorities in the state of Hessen uncovered the organization through evidence collected in a search of a prison cell. The network, founded on Hitler's birthday, operated as a charity intending to provide financial assistance to extreme-rightist convicts and their families. The network communicated through coded messages and letters and has also attempted to make contact with members of the NSU.

German Foreign Minister Guido Westerwelle met with Turkey's Ambassador to Berlin Hüseyin Avni Karslıoğlu to discuss the issue of the Turkish press not receiving accreditation to witness the trial. In a statement released after the meeting, Westerwelle expressed that they wanted foreigners to be able to closely follow the NSU case. Westerwelle made a call on the Munich court to "find an acceptable solution" to allow Turkish press members to cover the trial.

The last living member of the Neo-Nazi Nationalist Socialist Underground (NSU) terrorist cell as well as accomplices will be tried in a hearing held in the Higher State Court of Munich which begins on April 17. The NSU is being tried for murdering ten people between the years 2000 to 2007. Of the ten people killed, eight were of Turkish heritage, one individual was of Greek origin and one was a German policewoman. Two members of the group; Uwe Bohnhardt and Uwe Mundlos, committed suicide in November of 2011 after a failed bank robbery attempt. The sole living NSU member Beate Zschaepe will face trial in a Munich Court in which not a single Turkish press organization was accredited to attend.

All traffic will be halted on Nymphenburg Street, where the Higher State Court of Munich is located, two days prior to the April 17 start of the NSU trial. Snipers will be positioned on surroundings roofs to the court house which will also be subject to special security measures beginning four before the first hearing.