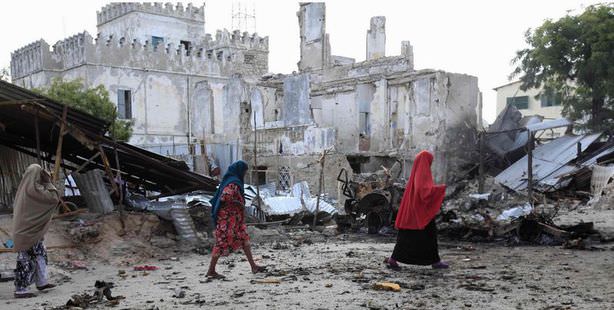 At least 19 people were killed in the Somali capital on Sunday, including a Somalian staff member of the Turkish Red Crescent Society, in suicide bombings and assaults by al Shabaab militants linked to al Qaeda, breaking a fragile return to peace in Mogadishu.

A bomb exploded outside law courts in the city as gunmen stormed the compound. Security forces then arrived and battled the fighters inside. Later, a bomb exploded near an African Union and Turkish Red Crescent convoy near the airport. Al Shabaab said it carried out the attacks.

"About seven well-armed men in government uniform entered the court today as soon as a car bomb exploded at the gate. We thought they were government soldiers," said Aden Sabdow, who works at the mayor's office adjacent to the court.

"Armed men entered the court and then we heard a blast. Then they started opening fire. We do not know the number of casualties," said Hussein Ali, who works at the courts.
Government forces arrived and laid siege to the compound and there were more blasts while the two sides exchanged gunfire. Hours later, the shooting stopped, but government forces said they believed some fighters were still hiding inside.

Reporters counted 16 bodies around the compound, some of them in uniform, some not, but it was not clear how many of them were government soldiers, attackers, or civilians.

Witnesses at the scene said in addition to the car bombs, three of the gunmen who stormed the court also blew themselves up using explosives strapped on their bodies.

Later, a car bomb exploded at a building housing Somali intelligence along the road to the airport as Turkish and AU vehicles were passing, police and witnesses said. Government forces then opened fire and blocked the road.

The driver of the convoy, a Somalian staff member of the Turkish Red Crescent was killed in the explosion and three Turkish staff members were injured. They were initially admitted to the Şifa hospital in Mogadishu, however sources say they may be airlifted to Turkey.

Security in Mogadishu has improved greatly since an African Union and Somali government offensive drove al Shabaab out of the coastal capital in August 2011.

Now its rubble-strewn streets are choked with traffic and construction sites point to a new confidence as Somalis return from abroad and invest in their homeland."Somalia is moving and will keep moving forward and will not be prevented from achieving the ultimate noble goal, a peaceful and stable Somalia, by a few desperate terrorists," President Hassan Sheikh Mohamud said in a statement on Sunday.