Syria is a threat to security of NATO nations 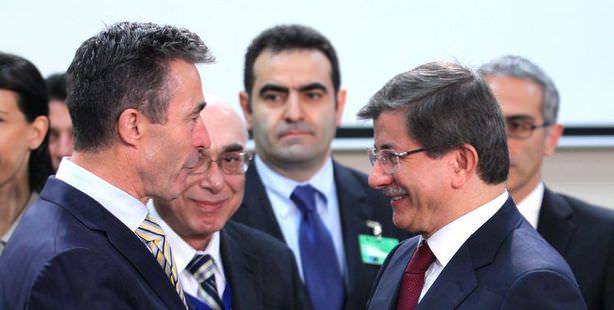 The situation in both Syria and Afghanistan was the focus of a meeting of NATO foreign ministers in Brussels on Tuesday. With foreign ministers from 28 nations attending the meeting, Turkey was represented by Ahmet Davutoğlu.

Speaking to reporters prior to the start of the meeting, NATO Secretary-General Anders Fogh Rasmussen, qualified the developments in Syria as "a true tragedy" and said that the international community needs to deliver a strong message to the Assad regime in order to ensure the legitimate demands of the Syrian public are fulfilled.

AN INVITATION FOR CAUTION

Rasmussen also expressed that NATO is worried about the risk of the conflict spilling over Syria's borders, adding: "I can assure you that we stand ready to defend, protect our allies, in this case Turkey, as a neighbor of Syria. We have all plans ready to ensure effective defense and protection of Turkey."

Mentioning that Turkey has been the victim of the Syrian conflict spilling into its borders and is also hosting an intense influx of Syrian refugees, Rasmussen stated, "We are extremely concerned about the use of ballistic missiles in Syria and the possible use of chemical weapons," Rasmussen said. "There is no call for NATO to play a role, but if these challenges remain unaddressed they could directly affect our own security," he told reporters. "So we will continue to remain extremely vigilant," Rasmussen also told reporters during the news conference.

"This continues to pose a threat to regional stability," said Rasmussen noting that a political solution will be the only way to bring an end to the crisis in Syria. The NATO Secretary-General called on the international community to reach a political solution in accordance to the Geneva Communiqué.

A WARNING FOR NORTH KOREA

North Korea was also the recipient of a verbal warning at the NATO summit. In a statement released following yesterday's meeting, NATO foreign ministers condemned North Korea's threatening rhetoric "in the strongest possible terms." The ministers went on to state, "North Korea's provocative actions are in direct violation of UN Security Council resolutions and seriously undermine regional stability, jeopardize the prospects for lasting peace on the Korean Peninsula and threaten international peace and security."