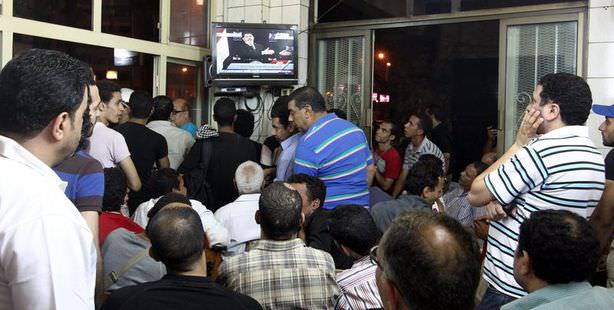 The meeting comes as deadline looms Wednesday for a 48-hour ultimatum issued by the military for Egypt's political foes to resolve the crisis.

Egypt's Armed Forces General Command, under Defense Minister Abdel Fattah El Sisi, is meeting with representatives of political powers to find a way out of the current political deadlock gripping the country.

The opposition National Salvation Front leader Mohammad ElBaradei, Grand Imam of Al-Azhar Sheikh Ahmed El-Tayeb, Pope Tawadros II of Alexandria, Galal Morah, secretary-general of the Salafist Nour Party, are said to also be in attendance. The Muslim Brotherhood's Freedom and Justice Party (FJP) had been invited to the meeting but supposedly no representative was attending.

"ElBaradei was surprised but he agreed to attend in line of positive response to the army initiative to protect the people and lead to stability," one source said. The powerful army establishment had given all parties, including the president, two days to thrash out a settlement for a political deadlock that brought millions of people onto the streets nationwide this week. It threatened to otherwise come up with a roadmap for the future of Egypt and supervise its implementation.

But a defiant Morsi went on state television late last night insisting he would not allow any institution, group or individual to undermine his constitutional authority, and ruling out any possibility of early presidential elections even if his life was the price. He offered to change government, amend constitution, speed up preparations for parliamentary elections and work on national reconciliation, if the opposition agrees on such a settlement.

A couple of hours later a Facebook page affiliated to the army forces published statements attributed to Defense Minister Abdel Fattah El Sisi that the army was ready to "shed our blood" in defense of Egypt and its people. Though the post did not clarify when or where these remarks were made, many took that as a defiant reaction to Morsi's televised speech.