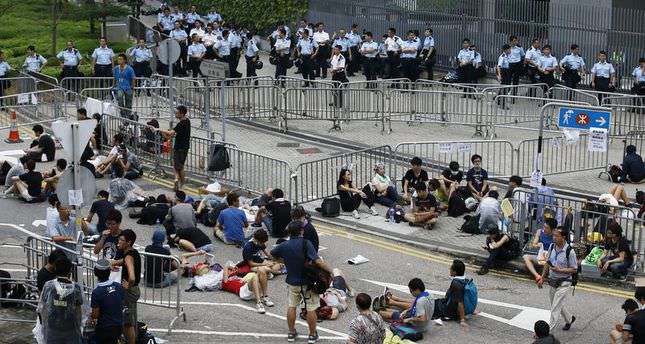 by AA Oct 03, 2014 12:00 am
Pro-democracy demonstrations headed into their sixth day Friday morning after tensions eased overnight, with protesters disagreeing over whether to expand their occupation of roads to include another major East-West thoroughfare.

Hong Kong's leader, chief executive Leung Chun-ying, said at an 11th hour press conference late last night that he had appointed Carrie Lam, the chief secretary, to negotiate with the protesting students on behalf of the government.

That concession by Leung helped defuse some of the hostilities between the two sides and the night passed peacefully.

On Thursday, tensions had escalated after police - in full view of protesters - carried fresh supplies of tear gas and plastic bullets behind their lines stationed outside Leung's offices.

Leung's announcement came just minutes before the midnight deadline protesters had set for the government to respond to their demands.

But at the briefing, Leung also said he would not step down, which is one aim of the protesters' bigger goal -- for China's central government to allow the territory to choose its own leader by universal suffrage.

Hong Kongers go to the polls in 2017 to choose their next chief executive - an election many have accused China of trying to control.

Some students had blocked Lung Wo Road, which is just a stone's throw from the chief executive's office, Hong Kong-government run broadcaster RTHK reported.

Student leader Lester Shum, the deputy secretary general of the Hong Kong Federation of Students, had urged protesters not to obstruct the dual carriageway that snakes its way between the government's central offices-the main protest site-and Victoria Harbor.

"I will not resign," the chief executive said. "I have been saying that we should all follow the Basic Law and work within the framework of the law. Only if we follow the provisions of Basic Law and the decision of the NPC [National People's Congress, China's parliament] can we achieve universal suffrage in 2017."

In August, Chinese leaders ruled that while Hong Kongers could choose their next chief executive in the 2017 elections, the candidates would have to be approved by Beijing first.

Thursday's briefing unfolded as students massed outside the offices of the chief executive, blocking vehicular access to the building. Metal barriers separated the protesters from hundreds of police officers who stood in formation.

Leung said that the government was willing to discuss constitutional development with the public as long as it was done peacefully. Standing by Leung's side at the briefing, Lam said she would meet with students leaders as soon as possible - a promise the protestors responded to with cheers.

The Federation of Students expressed in a statement that it was looking forward to the meeting with Lam.

"We hope that the Chief Secretary, like her fellow citizens, will be committed to this city and willing to have an open dialogue," it said.

Occupy Central with Love and Peace (OCLP) also welcomed the news by saying in a statement, "OCLP hopes the talks can provide a turning point in the current political stalemate."

"We will fully support the students in the process. OCLP respects the students' position that they will concentrate on discussing political reform at the negotiating table," it added.

However, OCLP continued to call for Leung's resignation: "We reiterate our view that Chief Executive Leung Chun-ying is the one responsible for the stalemate, and that he must step down. In order to achieve real universal suffrage, the National People's Congress Standing Committee must withdraw its decision on Hong Kong's political reform."

The vice-chancellors of the Chinese University and the University of Hong Kong, Joseph Sung and Peter Mathieson, welcomed the government's decision to enter negotiations with protesting students, RTHK reported Friday morning.

Visiting protesters, Sung and Mathieson called on them to remain calm. Mathieson later said Leung's announcement of talks with the students was evidence of real progress.

One protester, a 21-year-old playing poker with friends expressed his concern that Hong Kong is becoming more like mainland China.

"I know the situation in China-everything depends on connections, on whom you know," he told the Anadolu Agency. "People are always bribing others. Moral and ethical standards are low. I don't want Hong Kong to be like that."

The protester did not wish to be named for reasons of confidentiality.

The non-violent movement is seen as the biggest challenge to Chinese rule in Hong Kong since Beijing resumed sovereignty in 1997.

Some observers worry that if the protests persist and the Hong Kong police again fail to disperse the demonstrators, the Chinese military -- known as the People's Liberation Army -- could be ordered to intervene.

That scenario revives memories of the killing of student protesters in Tiananmen Square, in the heart of Beijing, in June 1989. The 1989 movement, initiated by students to push for a democratic China, ended when the military shot dead hundreds, perhaps more than 1,000.