Republicans likely to dominate Senate after US midterm elections 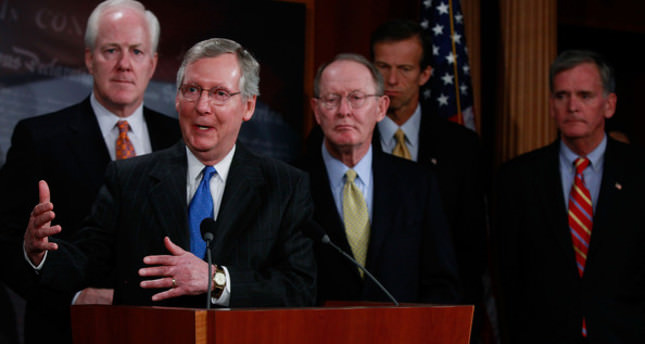 by daily sabah
Nov 05, 2014 12:00 am
The United States midterm elections took place yesterday after time of print with the race for the Senate majority between Democrats and Republicans showing a tight polling margin ahead of results. If the outcome of the election favors Republicans taking control of both houses, they have big plans on their agenda to challenge Obama's health care plan and his economic policies regarding the U.S.'s economic recovery. "The wind is at our backs," Senator Rand Paul, a potential 2016 Republican presidential candidate, told CNN on Sunday, as AFP news agency reported. "I think people are ready for new leadership," he said. "We intend to be a responsible governing Republican majority," the Republican Party's top Senator Mitch McConnell told ABC News.

In order to wrest control of the Senate from Democrats, six States have to be won by Republicans. Currently, Republicans control the House of Congress while the Senate is under the control of Democrats. Yet, the national election would prove a significant shift in U.S. administration policies as President Barak Obama would spend his last two years in office facing a hostile U.S. congress.

In the middle of his second term, President Barack Obama has faced growing criticism from Republicans, who based their campaigns on attacks against the U.S. president and his policies. Widespread fear of Ebola, the advance of radical Islamic State of Iraq and al-Sham (ISIS) militants in Iraq and Syria and the ongoing economic recession has led to severe criticism of Obama's policies. As the battle for power in Washington escalates, these threats were seen as being among the most important issues in this election. Many Republican candidates have linked border immigration to ISIS while urging for broader border control due to possible terrorist threats.

Ahead of the U.S. national election, Pew Research Center conducted a survey of the opinion of the general public concluding that 33 per cent of Americans believe that the nations' economic conditions are poor while few Americans believe in a possible recovery in the near future. The survey also states that: "More voters now see the Republicans as the party that could do a better job on key issues, but they rate the Democrats higher when it comes to the party's image." Another finding shows "68 percent of registered voters said that they don't want to see most house members re-elected and 35 percent of voters do not want to see their own representative return to office."