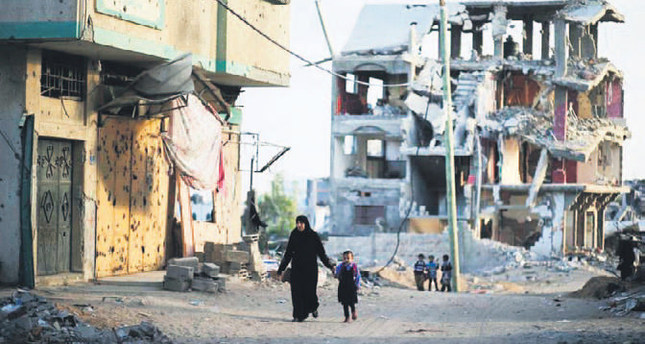 by AA Nov 09, 2014 12:00 am
Gaza's people, whose houses were entirely destroyed by the most recent Israeli onslaught, recently built the New Istanbul neighborhood where they will spend the upcoming winter months. They constructed shacks made of wood and other material with their limited resources, and although it has been months since the cease-fire was announced and the international donors' conference held in Cairo on Sept. 12 raised $5.4 billion for the reconstruction of the Gaza Strip, those affected by the war have used their own resources to return their lives to some degree of normalcy.

Yusuf Ebu Sheriteh spoke to Anadolu Agency saying the locals decided to build wooden houses on a small hill situated on Gaza's eastern border by collecting awnings, timber and fruit boxes. Sheriteh said they were inspired by Istanbul's wooden houses and are working to establish a small neighborhood to continue their lives. He commented that no one has helped them rebuild their region yet since the donors' conference that took place one month ago. Gaza's people are in desperate need of proper houses before the cold winter days arrive so it is an alternative and temporary solution, Sheriteh said. "We have no choice but to take care of ourselves. The rebuilding projects have not started yet. To protect our houses, we surround them with plastic coverings," he added.

Currently, Kerm Ebu Salim is the only trade border between Israel and Gaza and it is difficult to bring construction materials such as iron and concrete from there. The locals can easily find timber though, and the cost of building wooden houses is relatively low, Sheriteh said. "Our cheap wooden houses challenge the eight-year Israeli blockade on Gaza," he concluded.

The Israeli incursion into Gaza that started on July 7 lasted 51 days, killed 2,158 civilians and more than 11,000 people were injured. It was announced that 17,200 houses, 73 mosques and 24 schools were totally destroyed while thousands of buildings were damaged. On Aug. 26 a cease-fire agreement brokered by Egypt between Israel and Palestine ended the attacks on the Gaza Strip.