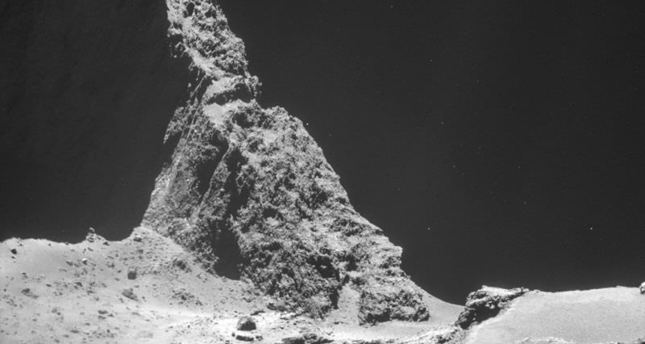 by Associated Press
Nov 12, 2014 12:00 am
A historic attempt to land the first-ever spacecraft on a comet was set in motion on Wednesday by scientists at the European Space Agency, despite a last-minute problem with the landing system.

It is the climax of a decade-long mission to study a 4-kilometer (2.5-mile) wide lump of dust and ice known as 67P/Churyumov-Gerasimenko. It is also the end of a 6.4 billion-kilometer (4 billion-mile) journey on which Rosetta carried its sidekick lander Philae piggyback to reach the comet.

ESA announced early on Wednesday that the lander's active descent system, which uses thrust to prevent the craft from bouncing off the comet's surface, could not be activated. Instead, the agency is relying on ice screws and a harpoon system to secure the lander.

"The cold gas thruster on top of the lander does not appear to be working so we will have to rely fully on the harpoons at touchdown," said Stephan Ulamec, Philae Lander Manager at the DLR German Aerospace Center.

"We'll need some luck not to land on a boulder or a steep slope."

If all goes to plan, the washing machine-sized lander will have separated from Rosetta at 0835 GMT and drift down to the comet, where it will latch on using harpoons and screws. During the descent scientists will be powerless to do anything but watch, because the vast distance to Earth - 500 million kilometers (311 million miles) - makes it impossible to send instructions in real time.

Confirmation of a landing, if successful, should reach Earth by about 1603 GMT.

The plan is that Rosetta and Philae will then accompany the comet as it hurtles toward the sun and becomes increasingly active as it heats up. Using 21 different instruments they will collect data that scientists hope will help explain the origins of comets and other celestial bodies.

The European Space Agency says that even if the landing doesn't succeed, the 1.3 billion euro ($1.62 billion) mission launched in 2004 won't be a failure. Rosetta will be able to perform 80 percent of the mission on its own.