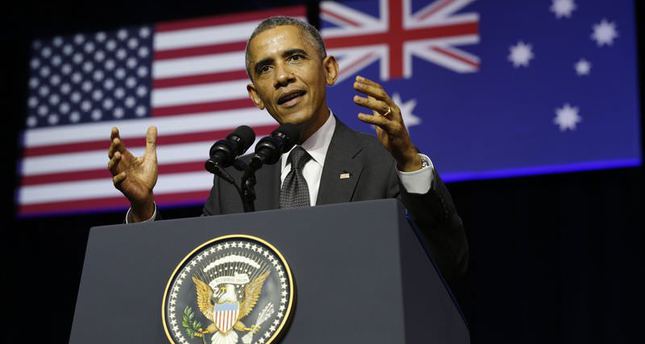 The watershed agreement this past week between the U.S. and China on the reduction of greenhouse gases is forcing Australia, which holds the 2014 G20 presidency, to put the issue on the summit's agenda.

Climate change dominated remarks by Obama, ignoring resistance from Australia's Abbott government, who had excluded the issue from the summit's agenda, preferring to keep the focus on more economic topics.

"Setting up a target, sends a powerful message to the world that all countries, whether you are a developed country, a developing country or somewhere in between, you've got to be able to overcome old divides, look squarely at the science and reach a strong global climate agreement next year," he said in a speech at the University of Queensland, ahead of the leaders' summit.

Citing as an example the threat to Australia's Great Barrier Reef, Obama stressed that no country was "immune" to effects of climate change, but that every nation had a responsibility to do its part in dealing with the issue.

Speaking at the International Media Centre in Brisbane, Ban Ki-moon also mentioned climate change, calling it the "defining issue of our times," and spoke of an accelerating transition towards a low-carbon, climate-resilient future for the world.

"The world also looks to the G20 to lead on climate finance," he said.

World leaders arrived at the Convention and Exhibition Centre in Australia's eastern coastal city of Brisbane on Saturday to attend the ninth meeting of the G20 summit.

Following the cultural celebrations at the Brisbane Convention and Exhibition Centre, the leaders moved on to the first working session of the G-20 summit on "Global Economy: Strengthening Growth and Jobs Creation."

Davutoglu is expected to give a speech during the weekend as Turkey is set to take over the 2015 term of the G20 presidency as of Dec. 1.

On Friday, in a publication from the the University of Toronto's G20 Research Group, Turkish Prime Minister Ahmet Davutoglu called for better interaction between the G20 countries and the developing and low-income countries in order to develop a global approach for growth.