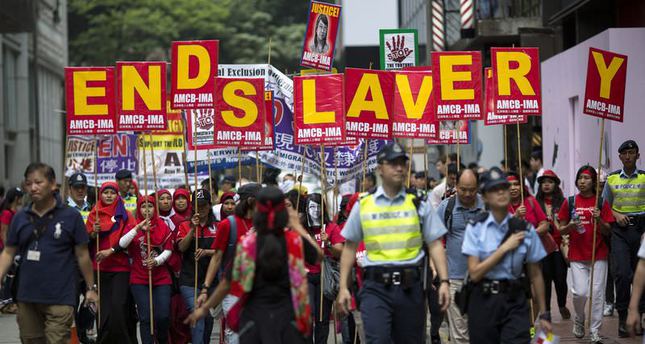 Almost 36 million people are living as slaves across the globe with an index released on Monday listing Mauritania, Uzbekistan, Haiti, Qatar and India as the nations where modern-day slavery is most prevalent. These listed five countries accounted for 61 percent of slavery, although it was found in all 167 countries covered by the report.

Releasing its second annual index, Walk Free increased its estimate of the number of slaves to 35.8 million, saying this was due to better data collection and slavery being uncovered in areas where it had not been found previously.

For the second year, the index of 167 countries found India had by far the greatest number of slaves. Up to 14.3 million people in its population of 1.25 billion were victims of slavery, ranging from prostitution to bonded labour.

Mauritania was again the country where slavery was most prevalent by head of population while Qatar, host of the 2022 World Cup, rose up the rank from 96th place to be listed as the fourth worst country by percentage of the population.

"From children denied an education by being forced to work or marry early, to men unable to leave their work because of crushing debts they owe to recruitment agents, to women and girls exploited as unpaid, abused domestic workers, modern slavery has many faces," the report said.

"It still exists today, in every country - modern slavery affects us all."

The index defines slavery as the control or possession of people in such a way as to deprive them of their freedom with the intention of exploiting them for profit or sex, usually through violence, coercion or deception.

The definition includes indentured servitude, forced marriage and the abduction of children to serve in wars.

Hereditary slavery is deeply entrenched in the West African country of Mauritania, where four percent of the population of 3.9 million is estimated to be enslaved, the report said.

After Mauritania, slavery was most prevalent in Uzbekistan, where citizens are forced to pick cotton every year to meet state-imposed cotton quotas, and Haiti, where the practice of sending poor children to stay with richer acquaintances or relatives routinely leads to abuse and forced labour, it said.

The tiny Gulf state relies heavily on migrants to build its mega-projects including soccer stadiums for the 2022 World Cup. It has come under scrutiny by rights groups over its treatment of migrant workers, most from Asia, who come to toil on construction sites, oil projects or work as domestic help.

The next highest prevalence rates were found in India, Pakistan, Democratic Republic of Congo, Sudan, Syria and Central African Republic.

The index showed that 10 countries alone account for 71 percent of the world's slaves.

For the first time, the index rated governments on their response to slavery. It found the Netherlands, followed by Sweden, the United States, Australia, Switzerland, Ireland, Norway, Britain, Georgia and Austria had the strongest response.

At the opposite end of the scale, North Korea, Iran, Syria, Eritrea, Central African Republic, Libya, Equatorial Guinea, Uzbekistan, Republic of Congo and Iraq had the worst responses.

Every country in the world apart from North Korea has laws that criminalise some form of slavery, yet most governments could do more to assist victims and root out slavery from supply chains, Walk Free Foundation's head of global research said.

"What the results show is that a lot is being done on paper but it's not necessarily translating into results," Fiona David told the Thomson Reuters Foundation by telephone from Canberra.

"Most countries got 50 percent or less when we looked at the strength of their victim assistance regime. It's also striking that ... out of 167 countries we could only find three (Australia, Brazil and the United States) where governments have put things in place on supply chains."

The report showed that conflict had a direct impact on the prevalence of slavery, David said, citing the example of the ISIS militant group which has abducted women and girls in Iraq and Syria for use as sex slaves.

"What our numbers show is the correlation really is quite strong so as an international community, we need to make planning for this kind of problem part of the humanitarian response to crisis situations," David said.