West reacts angrily to beheading of US citizen by ISIS 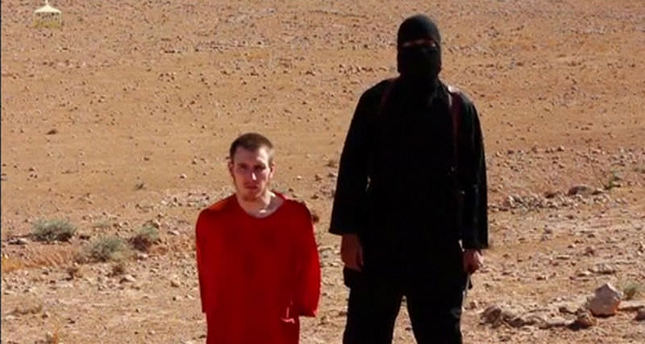 Western powers heavily condemned the beheading of the U.S. humanitarian worker and pledged their determination to battle ISIS while the U.S. announced that the mission of training Iraqi forces will be accelerated

Islamic State of Iraq and al-Sham (ISIS) militants beheaded an American citizen in a video released on Sunday. Unlike the previous ones, the video did not show the beheading, but showed a masked man standing with a decapitated head covered in blood lying at his feet. Speaking in English with a British accent, the man said, "This is Peter Edward Kassig, a U.S. citizen." Kassig, a 26-year-old from Indiana, is also known as Abdul-Rahman, a name he took following his conversion to Islam while in captivity. The victim's family said he was abducted in Deir al-Zor, Syria on October 1, 2013. A former soldier, Kassig was doing humanitarian work through Special Emergency Response and Assistance, an organization he founded in 2012 to help Syrian refugees, his family claimed.

U.S. President Barack Obama confirmed the death of the aid worker in what he called "an act of pure evil by a terrorist group that the world rightly associates with inhumanity." He denounced the extremist group, which he said "revels in the slaughter of innocents, including Muslims, and is bent only on sowing death and destruction." The slain hostage's parents, Ed and Paula Kassig, said they were "heartbroken" by their son's killing, but "incredibly proud" of his humanitarian work. Kassig "lost his life as a result of his love for the Syrian people and his desire to ease their suffering," his parents said in a statement from Indianapolis. The EU said Monday it remains "fully committed" to tackling the threat posed by ISIS militants after Kassig's killing. EU's high representative for foreign affairs and security policy, Federica Mogherini, and commissioner humanitarian aid and crisis management, Christos Stylianides, said in a statement that the killing of Kassig and 18 men described as Syrian military personnel showed ISIS's "resolve to pursue its terror agenda in breach of all universally recognized values and rights."

"All perpetrators of human rights abuses must be held accountable. The EU will spare no effort toward this objective. We remain fully committed to tackling the threat posed by [ISIS] and other terrorist organizations in Syria and Iraq, alongside our regional and international partners," they said in their statement.

The video showed not only the beheading of Kassig, but also the execution of dozens of soldiers loyal to Syrian President Bashar Assad. A man said on Monday that he believed his son, a British medical student, was among the executioners. Ahmed Muthana told the British-based Daily Mail newspaper that his 20-year-old son, Nasser Muthana, appeared to be among a group of 16 militants who were seen on the video. "I cannot be certain, but it looks like my son," said Ahmed Muthana, who lives in the Welsh city of Cardiff. "He must fear Allah now for killing people. How can he expect to face Allah if he is killing human beings?" he said. When asked if he will forgive his son, he said, "No, he must be mentally ill – either that or there is something else not right." The British Foreign Office said they were looking into claims that Muthana, who left his family to train with militants in Syria, was one of the militants in the footage. "Muthana was exposed as a terrorist-in-training after he appeared in a recruitment video for the insurgent group in June, devastating the family he left behind in Cardiff after it was circulated on the Internet. A prospective medical student, he was joined in Syria by his younger brother Aseel, 17, who has spoken of his willingness to die fighting. After arriving in the country, Muthana threatened to use his terror "skills" when he returned to the U.K.," Daily Mail reported. It is believed that thousands of foreign fighters from several nationalities fight with ISIS against the other opposition groups in Syria, the Syrian regime, the Iraqi government and the U.S.-led anti-ISIS coalition.

As ISIS warned that it will damage the U.S. and its citizens on all occasions, U.S. Secretary of Defense Chuck Hagel said on Sunday the Pentagon will accelerate its mission to train Iraqi forces to combat ISIS militants, using troops already in Iraq to start the effort while funding is sought for a broader initiative. Hagel, speaking to reporters while visiting the Army's National Training Center at Fort Irwin, California, said special operations forces had moved into Iraq's Anbar province in recent days to begin work on the training effort. Rear Admiral John Kirby, the Pentagon's press secretary, said later about 50 special operations troops were at Ein al-Asad air base working to set up the training mission. The base was home to a major U.S. military presence during the 2003 to 2011 Iraq war. Hagel's announcement follows President Barack Obama's November 7 decision to roughly double the number of U.S. troops in Iraq, adding 1,500 military personnel to establish sites to train nine Iraqi brigades and set up two more centers to advise military commands. Obama also sought $5.6 billion in funding from Congress for the initiative, including $1.6 billion to train and equip Iraqi forces. Officials initially said the funding would have to be approved by Congress before the new effort could begin.

Hagel said Army General Lloyd Austin, the head of U.S. forces in the region, had recommended American troops start the training with some of the 1,600 personnel already in the country to advise the Iraqi military. Kirby said about a dozen countries had made verbal commitments to help the training effort. Officials hoped that U.S. forces starting the mission would encourage foreign partners to move ahead as well. "We agreed with General Austin's recommendations to take some of the special operations forces that he has in Iraq and give them some early missions with the Iraqi security forces in Anbar to continue the mission, accelerate the mission," Hagel said. "So yes, we're doing what we can with the resources we have to give some acceleration to that," he said.