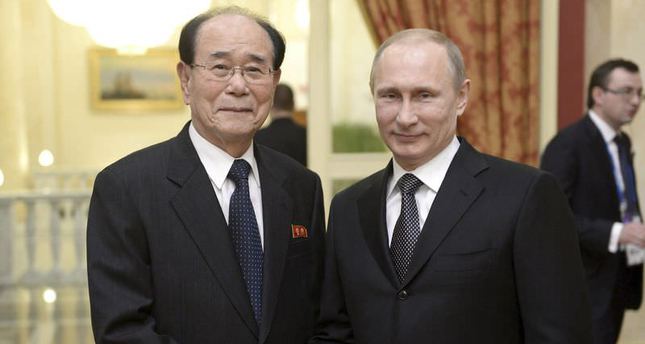 by reuters
Nov 19, 2014 12:00 am
Russian President Vladimir Putin called for deeper ties with North Korea to improve regional security on Wednesday, a day after holding talks with a personal envoy of the North Korean leader Kim Jong Un.

Russia is also one of five countries involved in talks with North Korea on its nuclear program. The others are South Korea, China, the United States and Japan.

The Kremlin gave no details of Putin's meeting on Tuesday with Choe Ryong Hae, a close aide to Kim and a senior official from the ruling Workers' Party who is making a seven-day trip to Russia.

But receiving the credentials of North Korea's new ambassador to Russia, Putin said during a televised Kremlin ceremony: "We maintain friendly relations with one of our neighbors, the Democratic People's Republic of Korea.

"A further deepening of political ties and trade and economic cooperation is definitely in the interests of the peoples of both countries and ensuring regional stability and security," he said.

A Russian Foreign Ministry source told Interfax this week that the visit would include discussion of bilateral ties, economic developments and North Korea's nuclear program but made no mention of the U.N. resolution.

"The subject of the denuclearization of the Korean Peninsula is constantly present on the agenda of our dialogue with North Korea," the source said. "Moreover, progress in this field is a mandatory condition of lifting the sanctions against the country which naturally impose big limits on our bilateral relations."

On Tuesday, a U.N. Assembly committee dealing with human rights passed a resolution calling for the U.N. Security Council to consider referring North Korea to the International Criminal Court for alleged crimes against humanity.

North Korea has dismissed the U.N. move as part of a U.S.-led plot to destroy its political system.

Diplomats say North Korea's ally China would be likely to use its Security Council veto to knock down an ICC referral and that Russia would probably support Beijing's stance.