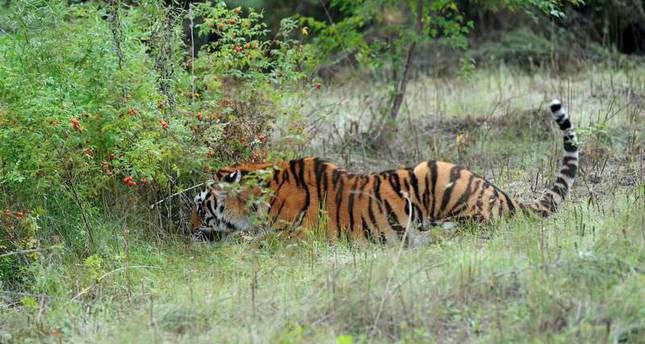 by AA
Nov 26, 2014 12:00 am
One of three Siberian tigers released into the wild by Russia's president is suspected of raiding a goat farm in northeast China.

The incident occurred around four weeks after another of the wild cats was reported to have attacked a calf in a village in the region.

Footprints and other traces left near the farm in Heixiazi Island in Fuyuan county of Heilongjiang belonged to Ustin, Zhu Shibing, a wildlife protection expert from the Northeast Forestry University, told Xinhua.

Xinhua correspondents reported seeing dead goats in the farmhouse, a hole the size of a human finger clearly visible in each goat's head, according to Zhu.

He added that the goat's skulls had been crunched, which illustrated the power of the tiger's jaws.

Putin released the cubs into the wild in early summer 2014. Thanks to their tracking devices, two of them - Kuzya and Ustin - were tracked into China.

Jiang Guangshu, executive deputy chief of field research at China's forestry administration, has said that they regularly receive updated findings from Russia on the tigers.

Siberians - one of the world's rarest animal species - predominantly exist in eastern Russia, northern Korea and northeast China. Fewer than 500 of them are believed to live in the wild.