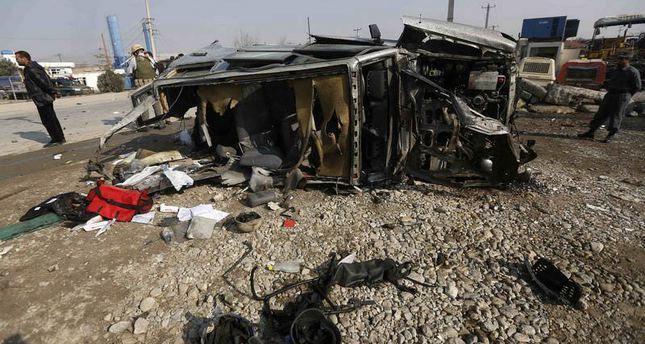 One British citizen was among five people killed, the Interior Ministry said in a statement. The other four killed in the blast were Afghans, the statement said.

The Afghan Taliban, ousted from power by a U.S.-led coalition in 2001, claimed responsibility for the attack, the latest in a wave of bombings to hit Kabul as the majority of foreign combat troops prepare to withdraw from the country by the end of the year.

General Ayoub Salangi, the Afghan deputy interior minister, said the bomber was riding a motorcycle and struck on a main road in eastern Kabul near the Green Village international zone, itself the target of a failed attacked last week by militants with a car bomb and gunmen.

Thursday's blast shredded the four-wheel-drive embassy vehicle, leaving a charred shell lying on its side.

Taliban spokesman Zabihullah Mujahid said in a text message that a suicide bomber "targeted foreign invading forces" and many were killed and wounded.

On Monday, a bomb in Kabul killed two U.S. soldiers as they were travelling in their vehicle.