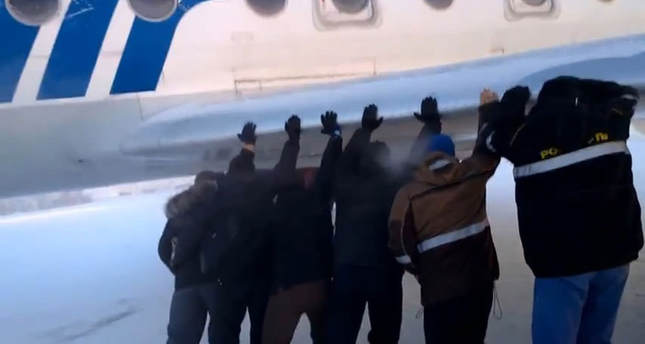 A group of hardy Siberian oil workers stuck in a frozen plane took matters in their own hands -- getting out to give the stranded jet a push.

The extraordinary story emerged Wednesday after a passenger posted a video on YouTube showing a group of cheery travellers pushing the Tupolev plane along the snow-covered runway in Igarka, which is beyond the Arctic Circle.

"Let's go," passengers in thick winter coats shout and whoop as they grab the wings of the plane and shove it several metres along the runway. "Everyone wants to go home," one man says.

Transport prosecutors in western Siberia said they were investigating the incident, which took place on Tuesday morning in temperatures of -52 degrees Celsius. "Due to the low air temperatures, the chassis's brake system froze and a tow truck was unable to move the plane onto the taxiway to carry out the flight," prosecutors said in a statement. "The passengers on board got out of the plane and started pushing it onto the taxiway."

The technical director of Krasnoyarsk-based Katekavia, Vladimir Artyomenko, told the Rossiyskaya Gazeta daily that the plane had been immobilised because the pilots forgot to take off the parking brake when they left the plane. "That caused the brake pads to freeze up," he said.

Passengers pushed the plane until it was able to turn and then the tow truck took over, he said. The flight then took off and went smoothly. The Tupolev-134 plane with 74 passengers on board was flying from Igarka, around 1,750 miles (2,800 kilometres) northeast of Moscow, to the Siberian city of Krasnoyarsk.

Showing that extreme weather is nothing unusual in Siberia, an Igarka airport worker commented to the popular Komsomolskaya Pravda daily that it was a cold day at -52 degrees -- and the flights would have been cancelled if temperatures had fallen another two degrees.

Even for Russians inured to long winters of sub-zero temperatures, the passengers' can-do chutzpah has drawn awed admiration. "Siberians are so tough that for them pushing a frozen plane along a runway is a piece of cake," said Komsomolskaya Pravda. The pilot "probably wouldn't have asked normal commercial passengers, but oil workers are normal, down-to-earth types, they all know each other. So he said: 'Come and help out if we want to take off'," test pilot Vadim Bazykin told Rosbalt news agency.

Social media too was abuzz with praise for the passengers. "Who mentioned sanctions?... We just push together and off we fly," Dmitry Kozlov wrote on Twitter, referring to the Western economic restrictions imposed on Russia over its actions in Ukraine.

"It's just an ordinary morning in Russia. People push-start a plane at minus 50," a user who identifies himself as Lentach tweeted. The airport's director, however, suggested that the passengers had decided to push the plane for a joke. "Most likely, the plane's passengers, oil workers, decided to do a kind of 'selfie'. It was a good joke and it became a big thing on the Internet," said Maxim Aksyonov, quoted by the TASS agency.

Prosecutors warned that the stunt could have been dangerous.

"They were pushing the plane as if it was a car that lost traction, which you categorically should not do due to the danger of damaging the skin of the fuselage," said Oksana Gorbunova, an aide to transport prosecutors, cited by Interfax news agency.