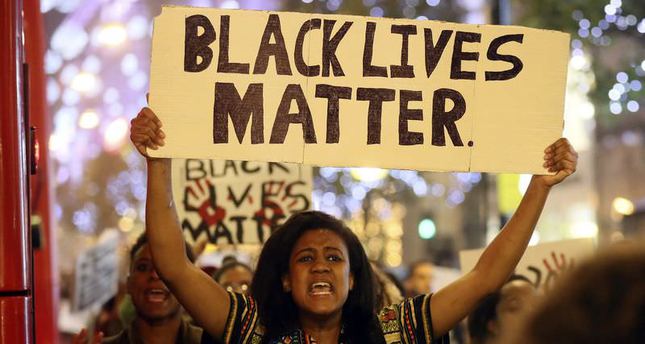 Hundreds of people in central London took to the streets on Wednesday night to condemn the U.S. grand jury's decision not to charge a white police officer who shot and killed a black teenager in August.

Michael Brown, a black 18-year-old, was shot six times by police officer Darren Wilson on August 9, after he was allegedly pulled over for not walking on the sidewalk in the St. Louis suburb of Ferguson. The grand jury's decision this week not to indict the officer who shot Brown sparked protests in Ferguson, and around the U.S.

And now, support for the Ferguson protesters has spread to other parts of the world, including Hong Kong and Palestine, where protesters are using social media to deliver their messages to the world.

Using the hashtag #Palestine2Ferguson, a Palestinian activist published an image on Twitter showing himself holding a banner reading: ''the Palestinian people know [what it means] to be shot while unarmed because of ethnicity.''

Another Palestinian activist posted an image of himself standing in front of rubble in Gaza, holding a banner reading: ''#PalestiniansSupportFerguson Because Oppressors from #Gaza to #Ferguson should be held accountable.''

Protesters in Ferguson began to use the ''hands up don't shoot'' gesture when police responded with heavy military equipment, which had been used in the Iraq war, against the demonstrators.

The gesture has spread to Hong Kong, where protesters also met with police force during rallies, as they demanded that China allow the 2017 chief executive election to be open to all candidates. Images have been published on Twitter of protesters in Hong Kong putting their hands up and wearing goggles and gasmasks.

Human Rights Watch released a statement on Tuesday calling on law enforcement in Missouri to respect the public's right to protest peacefully.

''Law enforcement has a duty to protect citizens from violence like that seen last night but it must do so without repeating the abuses we have seen in past months, which only fuel further rage and resentment,'' the statement said.

Each year, the U.S. Department of State releases a report that covers civil, political, and workers' rights in other countries.

"We see it as fundamental to our own interests to support a just peace around the world -- one in which individuals, and not just nations, are granted the fundamental rights that they deserve," the Department of State says on its website.

But critics say that the U.S. is calling on other countries to respect human rights without doing so itself -- citing the events in Ferguson and the detention without trial of prisoners in the Guantanamo Bay prison camp.

''Countries should be able to criticize other countries; however, one must deal with one's backyard, too,'' Elisabeth Lofgren, press secretary at Amnesty International in Sweden told The Anadolu Agency.

Lofgren said the U.S. should face up to the fact that the issue of violence by law enforcement is broader than a single incident in Ferguson, Mo. The discussion, she said, should also include, for example, Guantanamo Bay, where several prisoners have died in alleged homicides.

She said it's "unacceptable" for the U.S. to criticize torture while allowing it on inmates in Guantanamo.

According to Human Rights Watch's 2014 World Report, the U.S. has the largest imprisoned population in the world with 2.2 million people in adult prisons as of the end of 2011.