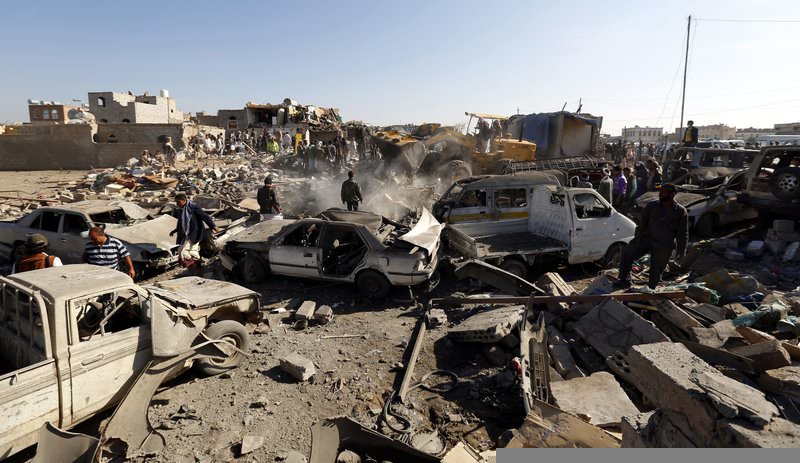 | EPA Photo
by Associated Press Apr 04, 2015 12:00 am
Russia called on the UN Security Council on Saturday to call for a "humanitarian pause" in the conflict in Yemen to allow evacuation of diplomats and civilians caught in the fighting between Shiite rebels and supporters of President Hadi.

Russia called an emergency meeting of the council and circulated a draft resolution demanding "regular and obligatory" breaks in airstrikes by a Saudi-led military coalition against Houthi Shiite rebels to allow the evacuation of foreign personnel. It makes no mention of a halt to fighting by the Houthis.

Russia's Deputy U.N. Ambassador Vladimir Safronkov told reporters as he headed into the closed meeting that a pause is "very important" to help diplomats and civilians caught in the war.

Houthi advances in southern Yemen have created turmoil in the country and led to the swift unraveling of the country's military and other forces still loyal to Hadi.

Wilson said it's extremely important to remember that the current crisis was caused by the Houthis repeatedly violating cease-fires and taking military action instead of genuinely engaging in political talks.

"The only way out of this crisis is a return to genuine political talks on an equal basis and not using force," he said.

Robert Mardini, head of the ICRC's operations in the Near and Middle East, warned that "many more people will die" unless food, water and medical care reach people in the worst-affected areas, including the besieged southern port city of Aden.

"For the wounded, their chances of survival depend on action within hours, not days," he said.
Last Update: Apr 04, 2015 8:35 pm
RELATED TOPICS