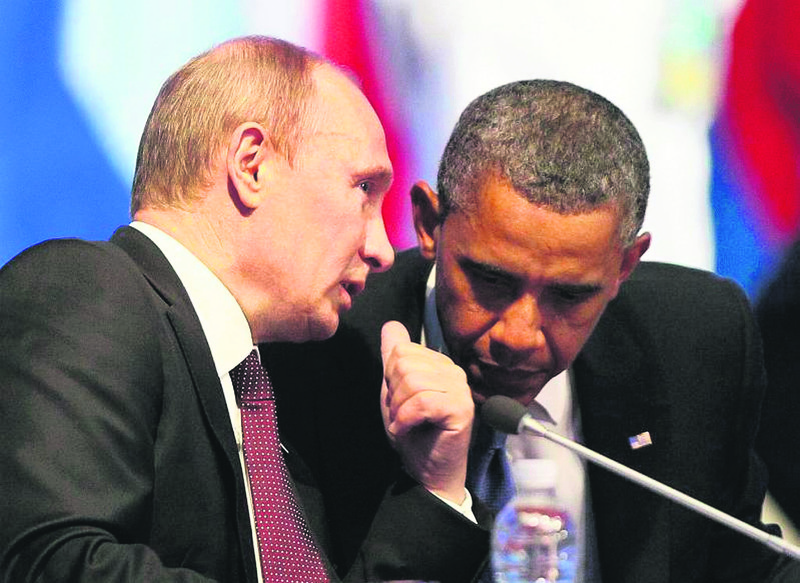 In a bid to ease tensions with the U.S., Russian President Putin called President Obama for July 4 greetings, saying there is a need to find a common solution to international problems to maintain global security and stability

Amid worsening relations between the U.S. and Russia, Russian President Putin sent July 4 greetings to U.S. President Barack Obama in order to build confidence between the two countries to find common solutions to international problems like the Ukraine crisis. "Putin expressed confidence that by building a dialogue based on the principles of equality and mutual respect for each other's interests, Russia and the United States are able to find solutions to the most complex international problems and effectively counter global threats and challenges," the Kremlin said. The July 4 greetings followed Putin's telephone call to Obama on June 25, which was the first time they had spoken since February.

Constant engagement is the best option when it comes to confronting Putin, Democratic presidential candidate Hillary Clinton said Saturday, adding: "We have to be much smarter." Clinton, a former secretary of state and senator who is making another run for the White House, also told supporters in Glen, New Hampshire of her personal experience with Putin. "We have to be much smarter in how we deal with Putin and how we deal with his ambitions," she said. "I have dealt with him. I know him. He is not an easy man. But I do not think there is any substitute other than constant engagement."

Relations between Moscow and Washington are at their lowest since the Cold War over Russia's actions in neighboring Ukraine. Moscow denies backing pro-Russian rebels in the east of the country. The Ukraine crisis has become the eighth bloodiest war, after Syria, Iraq, Afghanistan and Nigeria. According to 2015 U.N. figures, the death toll has already passed 6,000 and is expected to rise unabated. The breaches of the Minsk Accords have been widely reported, showing that the months-long crisis in Ukraine's east has yet to be resolved despite a series of mediating talks and peace efforts. Despite the tense ties, Putin sent a message earlier to Obama to mark Independence Day in the United States, saying that relations between Moscow and Washington were key to ensuring global stability and called for dialogue based on "equality and respect."

After the annexation of Ukraine's Crimea by Russia in March 2014, there has been growing fear among European countries that the Cold War years could be making a return. Russia's increased militarization of rebel-held areas in the Donbass region of Ukraine in the country's east and its explicit support of pro-Russian separatists who are fighting an insurgency for regional leadership close to Russia, have prompted fears among Eastern European countries. As tensions between Russia and the West grow, the ex-Soviet Baltic States and Scandinavian countries see Russia as a clear threat to their national security and territorial integrity.
RELATED TOPICS