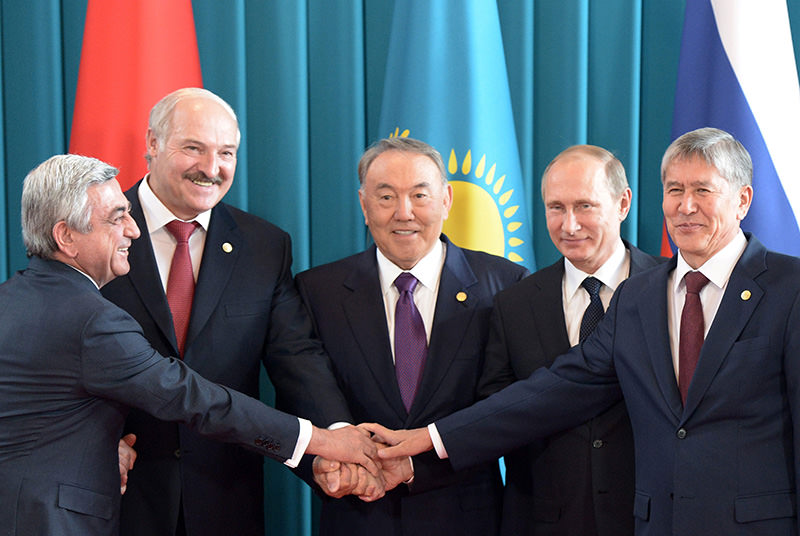 by Daily Sabah with DPA
Oct 16, 2015 12:00 am
During the summit of Commonwealth of Independent States (CIS) in Kazakhstan on Friday, Russian President Vladimir Putin acknowledged the presence of 5,000 nationals of Russia and former Soviet republics nationals fighting in the ranks of ISIS terrorist organization, and they will not be allowed to return back home.

We cannot let them return and to practice their experiences at home, Putin said in the summit attended by leaders of Armenia, Azerbaijan, Belarus, Kazakhstan, Kyrgyzstan, Uzbekistan and Turkmenistan.

Putin also added that Russia will continue its airstrikes as long as Syrian army continues its operations. Stressing that Russia only targets "terrorist" groups in Syria, Putin claimed that the airstrikes have achieved significant results.

Afghanistan's instability could spill over into Central Asia as militants seek to infiltrate new territory, Putin warned due to recent Taliban activity in the region.

He called for borders in the region to be strengthened and military cooperation with Russia's closest post-Soviet allies to be stepped up to prevent fallout from the war-torn country.

Putin said there must be a "reliable barrier on the external borders of the Commonwealth of Independent States," a post-Soviet bloc of nations that includes Russia and other major powers in Central Asia.

"I must agree with the president of Uzbekistan, who spoke with trepidation about the situation unfolding in Afghanistan," Putin said in a speech to the commonwealth's leaders at a summit in the Central Asian nation of Kazakhstan.

Putin described the condition of Afghanistan - where the Soviet Union fought a decade-long war against US-backed insurgent groups until 1989 - as "near critical," according to a transcript of the speech released by the Kremlin.

"Terrorists of varying creeds are gaining increasing power and do not hide their plans at further expansion," Putin said. "One of their goals is to break into the region of Central Asia. We need to be ready to react to such a scenario."

Putin spoke a day after US President Barack Obama said his country would extend its military presence in Afghanistan beyond next year because of the country's "still very fragile" security situation.

Last month in the commonwealth nation of Tajikistan, which borders Afghanistan, dozens of people were killed in clashes between authorities and extremist opponents of the secular government.

Tajikistan's leadership has long sought to prevent a spillover of radical Islamists from Afghanistan.