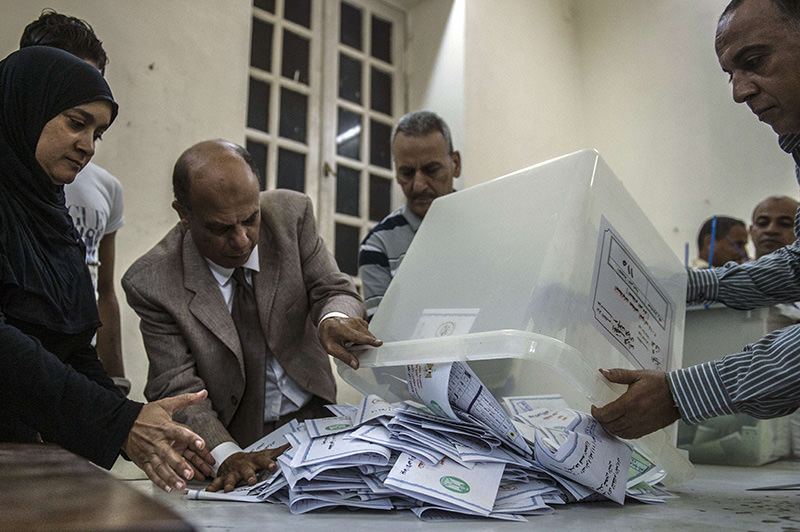 Election officials count ballots at the end of the first round of voting for Egypt's parliamentary election in Giza, Cairo on October 19, 2015 (AFP photo)
by Compiled from Wire Services Oct 22, 2015 12:00 am
The first round of Egyptian parliamentary elections, held over the weekend in half the country's provinces, saw turnout of only 26.6 percent, an electoral commission official said Wednesday.

That was a sharp drop from 62 percent registered in the first stage of the last parliamentary poll, held in 2011 months after the ouster of longtime president Hosni Mubarak.

Observers say the outcome of the election, which ends on December 2, is a foregone conclusion.

The 596-member parliament is expected to firmly represent President Abdel Fattah al-Sisi's iron-fisted policies in the absence of any opposition.

"The percentage of voters participation was 26.56 percent," Ayman Abbas, head of the Electoral Commission, told reporters.

More than 27 million voters were eligible to cast ballots in the first round, held on Sunday and Monday, across 14 of the country's 27 provinces.

All of the 103 constituencies from the first round will hold a run-off vote on October 27-28, Abbas said.

The second and final round of the election in the remaining 13 provinces begins on November 21, with more than 28 million eligible voters.

Any necessary runoff will be held on December 1-2.

Of the 596 lawmakers, 448 will be elected as independents, 120 from lists and the rest 28 will be direct presidential appointees.

The low turnout announced by the electoral commission confirmed expectations that Egyptian voters were apathetic to the parliamentary polls, the first since the 2013 military coup against the country's first democratically elected president, Mohamed Morsi.

The current elections are being held in the absence of any opposition.

"By banning key opposition parties and jailing tens of thousands of Egyptians for expressing dissenting views, [President Abdel-Fattah] Sisi has taken Egypt farther from the values of tolerance and pluralism that are required of democratic societies," Dokhi Fassihian, from Freedom House, a U.S. government-funded NGO, said.

While the Brotherhood has been brutally crushed and banned from contesting candidates, many secular and leftist groups are also either boycotting the vote or are badly represented.
Last Update: Oct 22, 2015 11:07 am
RELATED TOPICS