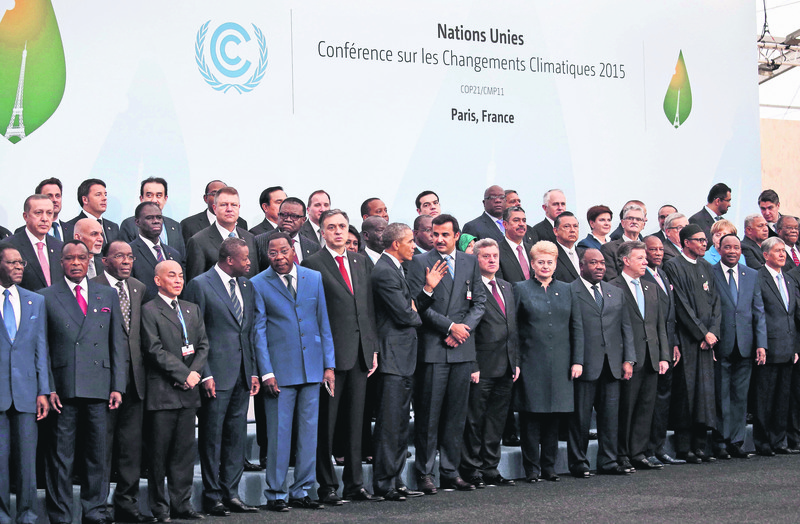 Some 150 leaders kicked off the climate summit in Paris in the largest single-day gathering of heads of state in history. Talks will continue for 12 days as leaders hope to make deals and avert a climate catastrophe

World leaders opened an historic summit, known as COP21, in the French capital on Monday with "the hope of all of humanity" on their shoulders as they hope to make deals and avert a climate catastrophe.

The heads of more than 150 nations convened in Paris to work out a deal that would indirectly restructure the world economy, weaning it off fossil fuels that contribute to global warming. They met at a conference center in Le Bourget on the northern outskirts of Paris under heavy security following terror attacks in the city which appeared to have galvanized the commitment for a climate breakthrough. It was the largest single-day gathering of heads of state or government in history, the UN said. "Never have the stakes of an international meeting been so high because it concerns the future of the planet, the future of life," French President Francois Hollande said in an opening speech. "The hope of all of humanity rests on all of your shoulders."

Organizers expect 40,000 participants at the summit, making it the largest so-called Conference of Parties (COP) ever. Scientists warn that, unless action to curb greenhouse gases is taken soon, mankind will endure ever-worsening droughts, floods, storms and rising seas, threatening millions with hunger, disease and migration and low-lying island nations with oblivion.

Hollande and UN Secretary-General Ban Ki-moon have urged world leaders to reach a bold agreement at the UN Climate Change Conference in the northeastern suburb of the capital Paris. "We are on the brink of a breaking point. Paris must be the start of far-reaching change. We can no longer consider nature as a pool of inexhaustible resources," Hollande said. "Bold climate action is in the interests of every single country represented at this conference," Ban Ki-moon said, adding "the time for brinkmanship is over."

U.S. President Barack Obama, who flew to Paris on the eve of the conference to pay homage to the victims of the Nov. 13 Paris attacks, said many poorer nations that had contributed little to climate change would be the first to feel its effects. But he stressed that there was no contradiction between strong economic growth and protection of the environment.

World leaders repeatedly vowed to forge an ambitious deal in honor of the 130 people killed in the attacks in Paris claimed by DAESH. The leaders began their talks with a minute of silence to remember the victims.

Obama's first act after touching down in Paris early Monday was to visit the scene of the worst carnage of the terror attacks at the Bataclan concert venue. He then met with Chinese President Xi Jinping before the summit started, with his focus turned to deepening co-operation between the world's two biggest emitters of the greenhouse gases that cause global warming. "As the two largest carbon emitters, we have both determined that it is our responsibility to take action," Obama said as he sat alongside Xi.

The United Nations has hosted annual conferences to tackle the vexed global warming issue since 1995, but all previous efforts have foundered, primarily due to deep divisions between rich and poor nations. Many poor nations insist rich countries bear the most responsibility for tackling the problem because they have burnt the most fossil fuels since the Industrial Revolution on their way to prosperity. "Justice demands that, with what little carbon we can still safely burn, developing countries are allowed to grow," Indian Prime Minister Narendra Modi wrote in a column published in the Financial Times on Monday before the summit opened.

But the U.S. and other developed nations insist more must be done by China, India and other emerging countries, which are voraciously burning coal -- the most carbon-emitting of the main fossil energies -- to power their fast-growing economies. In a timely illustration of the immediate ramifications of rampant coal burning, dangerous smog enveloped Beijing and other parts of northern China yesterday.

The Paris negotiations, taking place under the banner of the UN Framework Convention on Climate Change (UNFCCC), are due to wrap up on Dec. 11, but the annual talks are notorious for recrimination and delay.

Potential stumbling blocks are many, ranging from providing finance for climate-vulnerable and poor countries to scrutiny of commitments to curb greenhouse gases and even the legal status of the accord. Still, important progress has been made. A key success has been a roster where 183 nations have submitted voluntary pledges for reducing greenhouse-gas emissions. UNFCCC chief Christiana Figueres said these provide the architecture for more ambitious efforts that could eventually reach the goal of limiting warming to less than two degrees Celsius from pre-Industrial Revolution levels.

To press world leaders into forging an agreement, more than half a million people participated in climate protests around the world over the weekend.

The delegates of the 196 parties will hold meetings and discussions from Dec. 1 to Dec. 6 in a bid to strike a deal on carbon emissions regulations meant to keep the global average temperature within two degrees Celsius of what it was at the dawn of the industrial revolution. They will try to narrow down the draft text issued at the end of the last session in Bonn, while the second week is reserved for political negotiations to hammer out eventual disagreements. The key issues to be determined in Paris will be the system to review and scale up emission reductions over time, together with a long-term goal, climate finance, a loss and damage mechanism and the legal force of the "Paris Agreement."

The negotiations will conclude on Dec. 9 in order to carry out legal and linguistic verifications of the agreement text in six UN languages (Arabic, Chinese, English, French, Russian and Spanish) and decisions will be adopted on Dec. 10.
RELATED TOPICS