Climate talks get down to tough business of compromise 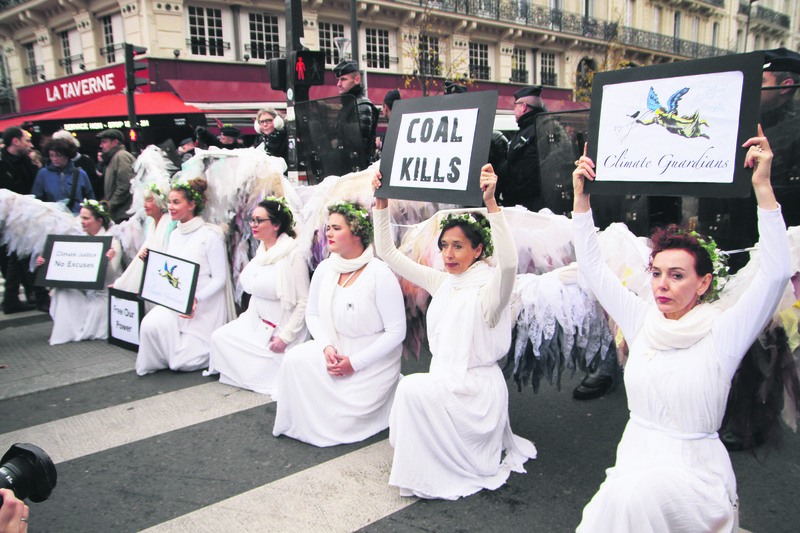 On the second day of the U.N.'s COP21 climate summit in Paris, French President Hollande met with African leaders. A key sticking point in the talks is how much rich countries should help poorer ones adapt to climate change and reduce their emissions

From deserts encroaching on African farmland to rising sea levels engulfing islands in the South Pacific, leaders of poor nations most affected by climate change are sharing their stories of global warming with leaders of some of the richest on Tuesday.

French President Francois Hollande met with African leaders while U.S. President Barack Obama met envoys from island nations who stressed one of the biggest debates among the delegates negotiating an international climate agreement at the summit: How much should rich countries help poorer ones adapt to climate change and reduce their emissions.

France pledged to give African countries 2 billion euros over the next four years to develop renewable energy and replace climate-harming fossil fuels, Hollande said yesterday. "France will devote 6 billion euros between 2016 and 2020 for electricity provision on the continent [of Africa]," he said on the sidelines of a U.N. climate conference, an unprecedented gathering of world leaders, outside Paris. "Two billion euros will be spent on renewable energy." At a meeting with Hollande, African leaders described the Sahara Desert encroaching on farmland, forests disappearing from the Democratic Republic of the Congo to Madagascar and rising sea levels swallowing homes in West African river deltas.

On Monday, presidents, prime ministers and princes urged the delegates to build a better planet for future generations. Organizers hope to avoid a repeat of the embarrassing collapse of a similar effort in Copenhagen in 2009 to reach a global climate accord.

The talks, which run through Dec. 11, are aimed at a broader, tougher replacement to the 1997 Kyoto Protocol. That treaty required only rich countries to cut their emissions, while this time the goal is for everyone to pitch in. One of the proposals involves saving the world's forests, which absorb carbon dioxide released by burning oil, gas and coal. Britain's Prince Charles, indigenous leaders and other dignitaries met yesterday to call attention to shrinking global forests from South America to Russia and Africa, in part because of illegal logging activities.

More than 180 countries have pledged to cut or curb their emissions, but scientists say much bigger reductions are needed to limit man-made warming of the Earth to 2 degrees Celsius over pre-industrial times, the internationally agreed-upon goal.

Some 150 leaders are attending the historical summit. The delegates of the 196 parties involved will hold meetings and discussions from Dec. 1 to Dec. 6 in a bid to strike a deal on carbon emissions regulations meant to keep the global average temperature within 2 degrees Celsius of what it was at the dawn of the industrial revolution.

India's Prime Minister Narendra Modi has put together an alliance of 121 sun-drenched countries to dramatically boost the use of solar power. The alliance issued a declaration vowing to mobilize more than $1 trillion in investment by 2030 for the "massive deployment" of affordable solar power. Modi, speaking on the sidelines of a 195-nation UN climate summit in Paris, said harnessing the sun's energy could help move the world toward a safer path. "The vast majority of humanity is blessed with sunlight during the entire year. Yet many are also without any sources of power," Modi, the leader of the International Solar Alliance, told world leaders Monday. France and India are members of the new group, which includes African, Asian, Middle Eastern, American, European and island countries which lie between the tropics of Cancer and Capricorn.

Chanting "Keep this fair, do your share," protesters at the Paris climate conference advocated for giving developing countries a greater voice at the monumental summit. A dozen activists unfurled banners and performed a skit yesterday outside exhibition halls hosting high-stakes climate talks through Dec. 11. "COP is rigged for rich countries," read one banner, referring to the conference's formal name, COP21. Meanwhile, French police yesterday banned demonstrations on Paris' prestigious Champs Elysees avenue and near the conference venue at Le Bourget north of the capital for the duration of the two-week UN climate talks. The police warned that "other bans could be taken, depending on the necessity and the circumstances" as authorities seek to avoid any repetition of Sunday's clashes between hard-left demonstrators and riot police in a city still reeling from the Nov. 13 DAESH attacks.

Obama met envoys on Tuesday from island nations hit hard by rising seas and increasingly violent storms, which scientists attribute to climate change prompted by man-made carbon emissions. Developing countries say they need financial support and technology to relocate threatened populations and make their own transition to cleaner energy. Obama said the emerging global climate agreement must have transparency provisions and periodic reviews of carbon-cutting targets that are legally binding. He added that without ambitious action on climate change, people may be forced to flee island nations and will become refugees and emphasized it's critical that "periodic reviews" be legally binding.
On Monday, rich countries announced a new fund to do exactly that, pledging a total of $248 million to it. The Obama administration didn't specify where its $51 million pledge would come from; Obama has struggled to persuade the Republican-run Congress to fund his climate goals, amid concerns that his energy plan is unattainable.
RELATED TOPICS