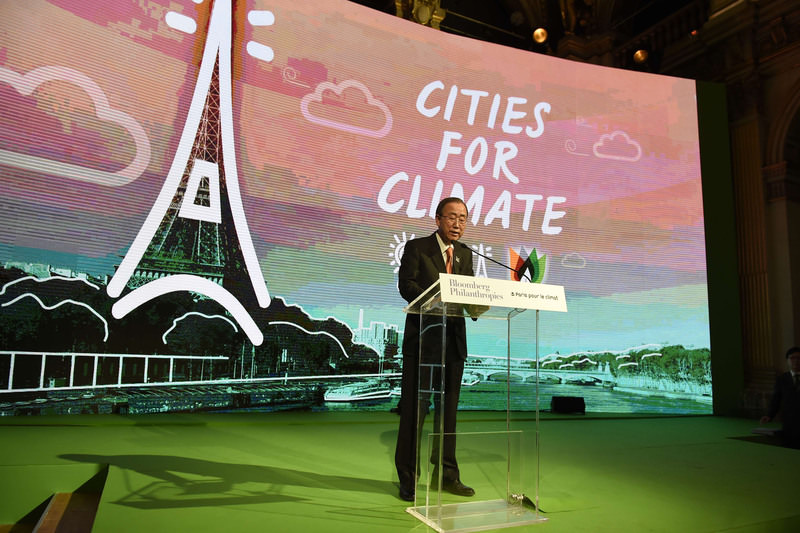 UN secretary general Ban ki Moon speaks during a meeting for new track investments for the climate as part of the World Climate Change Conference 2015. (AFP Photo)
by Dec 14, 2015 12:00 am
Calling the Paris climate deal "a health insurance policy for the planet," UN Secretary-General Ban Ki-moon on Monday called on all world leaders to attend a formal signing ceremony of the climate deal that would take place at the U.N. on Earth Day: April 22.

"The Paris agreement is a victory for people, for the common good, and for multilateralism," Ban said.

However, Ban also urged governments not to waste time in delivering on their commitments to fight global warming, saying:
"Now, actions should begin from today," after his return from Paris where the historic deal was reached Saturday, capping two weeks of tough negotiations.

After the April 22 signing of the deal, Ban will convene an action summit on May 5-6 to keep the pressure on the 195 governments that have pledged under the landmark deal to curb greenhouse gas emissions.

The accord sends a clear signal that the global economy is shifting to low-emission growth and contains strong accountability and transparency measures, he said.

The UN chief described the deal as "ambitious", setting a target of containing global temperature rise to well below 2 degrees Celsius from pre-industrial levels through a series of national measures.

The agreement will come into effect by 2020, once at least 55 countries responsible for 55 percent of global greenhouse gases ratify the accord.

Under the deal, there will be five-year reviews to take stock of implementation, and a first such assessment is scheduled for 2018.

The UN chief recalled that reaching the deal had been a top priority of his tenure when he took over as secretary-general at the United Nations in 2007.

Ban raised the climate talks at just about every meeting with world leaders.

"I sent alarm bells consistently and repeatedly to world leaders," he said.

UN climate envoy Janos Pasztor described the deal as a "monumental achievement" and said it sends a message to the financial markets that it's time to invest in low-carbon energy.
Pasztor rejected suggestions that the agreement will be difficult to enforce.

"The governments did not create a climate change police force," he said.

"But the information will be available in a transparent manner," allowing the United Nations to quickly point the finger at those who fall short of their commitments, he said.
Last Update: Dec 14, 2015 10:25 pm
RELATED TOPICS