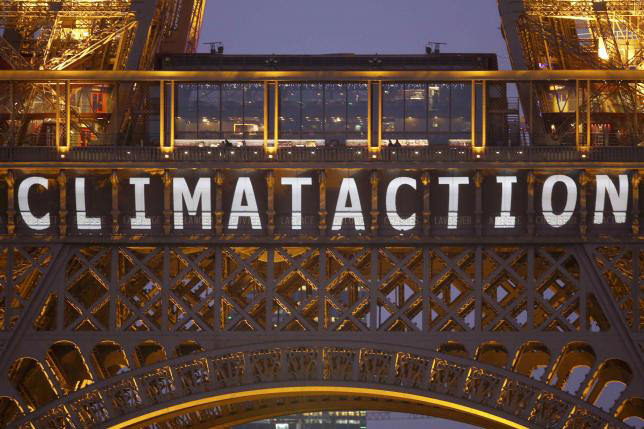 The slogan ''Climate action'' is projected on the Eiffel Tower as part of the World Climate Change Conference 2015 in Paris, December 11, 2015. (REUTERS Photo)
by Dec 15, 2015 12:00 am
The omission of aviation from the Paris climate deal could cause "a very big problem" if talks next year fail to make progress on a global plan to reduce aircraft pollution, the European climate chief said on Monday.

Earlier efforts to tackle the issue have foundered. Under threat of a trade war with China, India and others, the European Union had to suspend part of a law, meant to apply from 2012, that would have required all aviation using its airports buy pollution permits on its EU Emissions Trading System (ETS).

Aviation and shipping make up around 5 percent of global emissions, a share expected to grow to a third of all emissions by 2050 if left unchecked, according to European Commission data.

Just back in Brussels from U.N. talks that delivered a global climate pact, EU Climate and Energy Commissioner Miguel Arias Canete said a deal agreed by nearly 200 countries could never be perfect.

He said the European Union got most of what it wanted, but had been forced to drop its demand to include aviation and shipping, sectors that were similarly left out of the Kyoto Protocol, the predecessor to the Paris Agreement.

"For sure we would like to have had more and aviation and maritime are a clear case. We were fighting for it until the last moment," Arias Canete told reporters.

Inclusion in the deal would have injected momentum into the quest for agreement at the International Civil Aviation Organization (ICAO), which has been charged with finding a market-based global solution.

The EU was forced to limit the scope of its aviation law to flights within the European Union under pressure from nations including China and India which also opposed inclusion of the sector in the Paris accord, delegates said.

The EU only suspended its law on international aviation on condition the ICAO found an alternative market-based solution.

"If that doesn't happen, if there is no movement, then we will be in the middle of a very big problem," Arias Canete said.

Officials said the European Commission would decide on the next steps depending on the outcome of the ICAO meeting late next year.

Shipping is less far advanced than aviation towards agreement on a global scheme, environment campaigners say. The European Union has introduced measures to monitor pollution from the sector.