UN sickened by public hatred against Muslims around the world 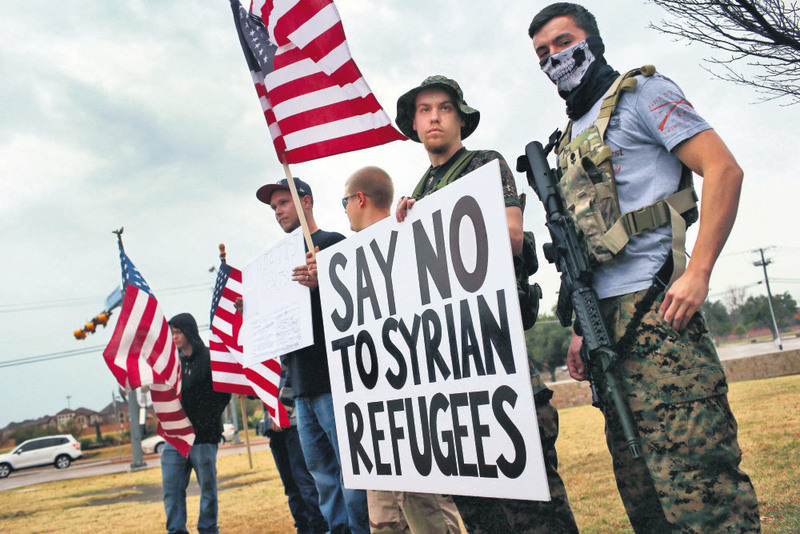 Armed protesters take part in a demonstration in front of a mosque on Dec. 12 in Richardson, Texas.
by Daily Sabah with Wires Dec 16, 2015 12:00 am

Two senior UN officials said Monday they are "sickened by blatant manifestations of hatred and intolerance" by public figures and others, particularly against Muslims, in response to recent extremist attacks.

Adama Dieng, the special adviser on the prevention of genocide, and Jennifer Welsh, the special adviser on the responsibility to protect civilians, said any "advocacy of national, racial or religious hatred that constitutes incitement to discrimination, hostility or violence" is prohibited by international human rights law and laws in many countries. In a joint statement, they denounced "the deliberate and dangerous spread of misinformation and the manipulation of people's fears and concerns for political gain." Dieng and Welsh strongly condemned extremist attacks but underlined that linking such attacks to Muslims has resulted in discrimination and targeting.

They said calls by U.S. political figures for Muslims to be banned from entering the United States, to be registered in a national database or to be forced to carry identification that would highlight their religion are "unacceptable" and "an affront to our common humanity."

They did not specifically name any Americans, but Republican presidential front-runner Donald Trump has advocated all of these positions, creating a political firestorm that has galvanized his supporters in the Republican base while generating denunciations from the party establishment and all the leading Democratic candidates.

Anti-Muslim sentiment was already building in the United States after the deadly Nov. 13 Paris attacks, with some Republican state governors saying they opposed resettling refugees from Syria's civil war in their states. It intensified after 14 people were killed on Dec. 2 in a massacre at a disability center in San Bernardino, California, carried out by a Muslim couple investigators say were inspired by DAESH. Experts say Trump's call on Dec. 7 to keep all Muslims from entering the U.S. a plan he said would apply only temporarily and to non-citizens had only fanned the flames. Dieng and Welsh said calls for governments to stop accepting refugees from Syria and Iraq are unacceptable. "Refugees from Syria and Iraq are fleeing precisely the kind of violence that we in the West also fear," they said.

In addition to anti-Islam sentiment among public figures, American Muslims have observed a spike in Islamphobic attacks, as well. Reuters reported on Monday that many mosques around the country are vigilantly stepping up security in the face of growing fears about a backlash against Muslims. "The picture is getting increasingly bleak," said Ibrahim Hooper, a spokesman for the Washington, D.C.-based Council on American-Islamic Relations. "There's been an accumulation of anti-Islamic rhetoric in our lives and that I think has trigged these overt acts of violence and vandalism." He said the rise in the level of anti-Muslim sentiment is reflected by some GOP presidential candidates, governors and others speaking out in opposition to the U.S. accepting more Syrian refugees. U.S. President Barack Obama also said DEASH does "not speak for Islam" and criticized Trump's Islamophobic proposal.

"The vast majority of Muslims are on our side of the battle unless we drive them away," Clinton said in a speech earlier this month in Washington. "Declaring war on Islam or demonizing the Muslim-American community is not only counter to our values, it plays right into the hands of terrorists."

At a time when the world is facing complex challenges including confronting violent extremist groups, the special advisers urged governments and other "leading actors" to "counter lies, prejudice and fear" and respect international and national laws.

Similarly in Europe, many Muslims felt obliged to speak out against them and said these killings never represent their faith especially after the rise of DAESH and its extremist attacks, such as in Paris. Hundreds of them have used social media to show support for Parisians and that the terrorists and attacks are not a part of Islam with the hashtags #NotInMyName and #IAmAMuslim following the deadly attack which killed 130 people. In fact, most victims of violence by DAESH other terrorist groups are Muslims, since they fight mostly in majority Muslim countries and often attack other Islamic communities such as Shi'ites and Sufis that they consider to be heretics. "DAESH has been killing Muslims by the thousands for years in Africa and the Middle East," said Yasser Louati, spokesman for the Collective against Islamophobia in France (CCIF).

Europe's populist right also rushed to demand an end to an influx of refugees from the Middle East in the wake of the attacks. Slovak Prime Minister Robert Fico pointed to Muslims in his country as a potential threat and said Slovakia would prefer to accept Christian refugees under the resettlement plan. Hungarian PM Viktor Orban also said EU migrant quotas would spread terrorism across Europe as parliament prepared a legal challenge against the quota regime. "Mandatory resettlement quotas are dangerous because they would spread terrorism across Europe," Orban said.
RELATED TOPICS