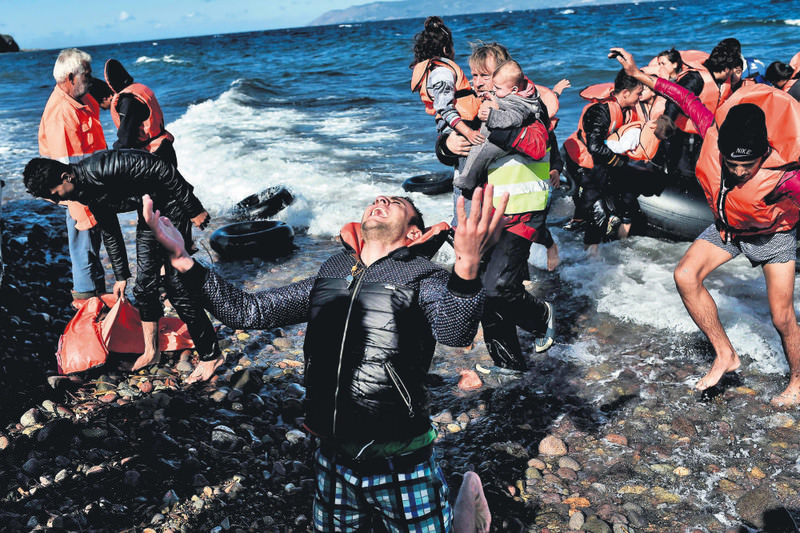 A U.N. official warned that humanitarian groups trying to help people fleeing conflicts are at breaking point. Meanwhile, the EU held a summit to discuss the Syrian crisis and European border force as well as Britain's reform demands

Humanitarian organizations attempting to help the soaring numbers of people fleeing conflicts and natural disasters around the world are at "a breaking point," U.N. refugee chief Antonio Guterres warned on Wednesday.

"In the last few years, we have seen a staggering escalation of displacement caused both by conflict and by natural hazards," Guterres told a conference in Geneva on the root causes of displacement. Conflicts and serious crises are raging in 27 countries, and six of them – the Central African Republic, Burundi, Nigeria, South Sudan, Syria and Yemen – have spilled over to surrounding regions, bringing the total number of countries currently in peril to a staggering 37, the U.N. said earlier this month.

The conflicts have forced more than 60 million people to flee their homes worldwide, with those escaping violence in Syria, Iraq and Afghanistan especially sparking Europe's biggest migration crisis since World War II. "The fact that we are seeing so many new crises breaking out without any of the old ones getting resolved, clearly illustrates the lack of capacity and political will to end conflict, let alone prevent it," Guterres said, pointing out that the number of people forced to flee daily due to conflict and persecution nearly quadrupled between 2010 and 2014. "The result is an alarming proliferation of unpredictability and impunity," he warned.

At the same time, the impacts of climate change and extreme weather events like floods, storms, cyclones and droughts are destroying more livelihoods and pushing even more people to migrate. "The resulting steep rise in humanitarian needs far exceeds the capacity of the international humanitarian community to provide the minimum core protection and life-saving assistance to all those affected," said Guterres, the U.N. High Commissioner for Refugees who is due to complete his 10-year tenure next month. He urged the international community to stop treating the two main causes of displacement "in silos," stressing that they are intimately intertwined and must be addressed together. "Violent conflicts, just like human rights violations and persecution, do not erupt in a vacuum," he said, pointing out for instance that the drought that displaced 1.5 million Syrians from rural to urban areas between 2007 and 2010 contributed to the tensions that set off the ongoing devastating conflict. "The moment has come for a radical change in international efforts to address di splacement," he said, warning that the humanitarian organizations trying to respond to the towering needs "are at a breaking point." "We must stop just dealing with the consequences of displacement, and seriously start tackling its root causes," he said.

Earlier, Guterres said more than two-thirds of refugees worldwide are Muslim and stressed the world must counter "the backward narrowness of xenophobia." He said events in recent months in Europe "have illustrated the battle of compassion versus fear, of tolerance versus xenophobia."

The turmoil in the Middle East, Africa and the five-year war in Syria have led many people to flee the conflict in an attempt to seek security and shelter in a more prosperous and peaceful country, such as in Europe. However, Europe has been slammed for lacking a collaborative response to the crisis. Despite emergency meetings and calls for unity for refugee relocation schemes, several European countries, especially in the East, have been opposing to the quotas. Compared to Syria's neighboring countries, the U.N. refugee agency encouraged European countries to do more to share the burden of the international community in the refugee crisis.
RELATED TOPICS