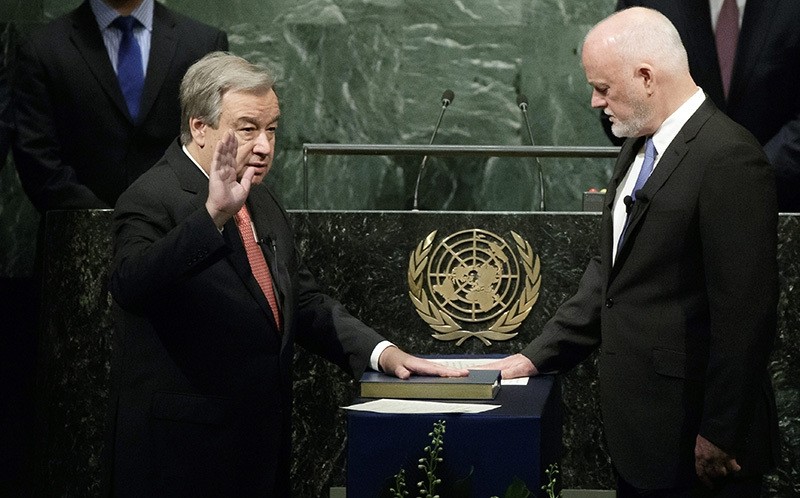 Antonio Guterres (L) is sworn in as the new Secretary-General of the United Nations by Peter Thomson (R), President of the 71st session of the General Assembly, at UN headquarters in New York, Dec. 12, 2016. (EPA Photo)
by Compiled from Wire Services Dec 12, 2016 12:00 am

Antonio Guterres was sworn in Monday as the ninth secretary-general of the United Nations, saying the world body must change to better confront global crises such as the war in Syria. During a solemn ceremony at the General Assembly, the former prime minister of Portugal placed a hand on the U.N. charter and took the oath of office administered by the president of the General Assembly, Peter Thomson.

The first former head of government at the U.N. helm, Guterres takes over from Ban Ki-moon on Jan. 1 amid ongoing bloodshed in Syria and questions over how the U.S. role in the world should shift under President-elect Donald Trump.

"This organization is the cornerstone of multilateralism, and has contributed to decades of relative peace, but the challenges are now surpassing our ability to respond," Guterres said in an address. "The U.N. must be ready to change."

The 67-year-old socialist politician said the United Nations must "recognize its shortcomings and reform the way it works," singling out the failure to prevent crisis as a serious weakness.

The U.N.'s refugee chief for a decade, Guterres was sworn in as Syrian forces were on the verge of retaking the entire city of Aleppo - a potential turning point in the nearly six-year war. "This is a war in which everybody is losing. This became a threat for everybody around the world," Guterres later told journalists. "It is high time to put an end to this nonsense."

Guterres vowed to "engage personally" in conflict resolution, signaling a more pro-active approach to the role of secretary-general than under the 72-year-old Ban, the South Korean who led the world body for two five-year terms.

The election of Guterres has energized U.N. diplomats who see him as a skilled politician, able to overcome divisions that have crippled the United Nations, notably over Syria.

But Trump's shock election has raised questions over Washington's future role in the world and its relationship with the United Nations - as the world body's biggest financial backer.

The new U.N. chief will begin work just weeks before Trump takes office on Jan. 20. "Fear is driving the decisions of many people around the world," Guterres said, in a reference to the surge of populism that propelled Trump to the White House.

He pledged to show the new US administration a "clear will to cooperate in relation to the enormous challenges we will be facing together." Guterres laid out three priorities for change during his five-year term: work for peace, support sustainable development and improve internal U.N. management.

The 71-year-old United Nations has been criticized for its clunky bureaucracy, which has at times slowed down the response to global emergencies. Guterres vowed to press ahead with gender parity at the United Nations, saying it was a priority to appoint more women to senior posts.

"It benefits no one if takes nine months to deploy a staff member to the field," he said. "The United Nations needs to be nimble, efficient and effective. It must focus more on delivery and less on process, more on people and less on bureaucracy."

Among the appointments expected soon, Nigeria's Environment Minister Amina Mohammed is tipped to become U.N. deputy secretary-general, diplomats say. Guterres fought for migrants' rights as U.N. High Commissioner for Refugees from June 2005 to December 2015. He served as prime minister of Portugal from 1995 to 2002.

The swearing-in came after the 193 General Assembly members paid tribute to Ban, ending with a standing ovation for the native South Korean.

U.S. Ambassador to the U.N. Samantha Power lauded Ban's accomplishments while in office and said she was confident Guterres is the right person to replace him. "He is the man for the job in such challenging times," she said.

The selection of a new secretary-general had traditionally been decided behind closed doors by a few powerful countries. But this year, the process involved public discussions with each candidate who was campaigning for the job.

U.N. chiefs are charged with promoting sustainable development, working for peace around the globe, protecting human rights and dealing with humanitarian catastrophes.