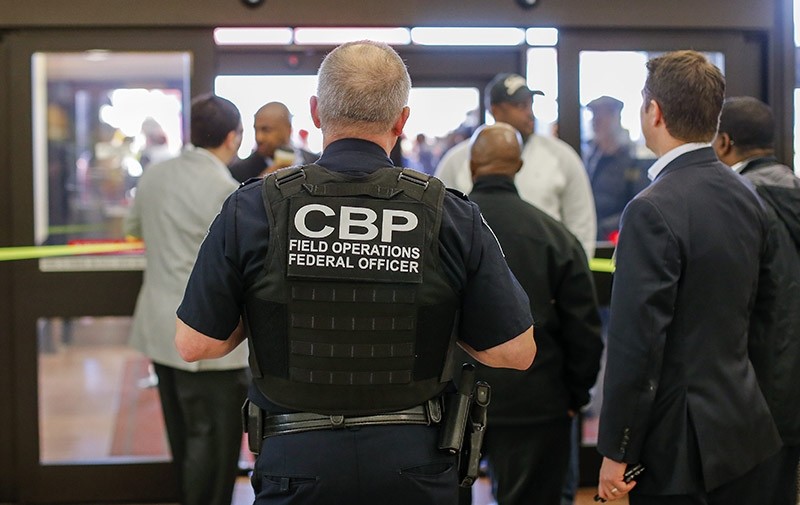 A Customs and Border Protection (CBP) federal officer watches from inside the terminal during a protest at Hartsfield-Jackson Atlanta International Airport (EPA Photo)
by Anadolu Agency Feb 02, 2017 12:00 am

American Muslims returning to the U.S. are being targeted for enhanced questioning, the head of Council on American-Islamic Relations' (CAIR) Florida bureau told Anadolu Agency on Wednesday.

"For years there have been reports of American Muslims detained by customs and questioned about their religious practice," Hassan Shibly said.

"However, in the last two weeks, we noticed a strong increase in members of the American Muslim community, who are U.S. citizens, being subjected to secondary inspection," he added, referring to an additional level of questioning some travelers are subjected to when they enter the U.S.

The Trump administration has vigorously defended the ban on grounds of national security, in defiance of massive nationwide protests and legal challenges questioning the constitutionality of the ban.

Shibly estimates 50 - 70 percent of those held back hours for secondary inspection are Muslim, despite the fact that American Muslims represent 1 percent of the population.

CAIR has received "thousands of complaints" in an "overwhelming" surge of feedback online and through other communication channels. "It is very clear, there is no denying that the CBP [Customs and Border Protection] is disproportionately targeting law abiding American Muslims for enhanced questioning," he said, calling it "gross violations of civil rights".

Muslim Americans are asked "extremely inappropriate" questions suggestive of religious profiling, such as: "Are you a devout Muslim?", "How many times a day do you pray?", "What school of thought do you follow?" and "What scholars do you listen to?"

CBP then shares the information with the FBI without disclosing the practice to those who were questioned, Shibly added.

He said CAIR found out about the practice after Muslims complained they received "follow-up visits with the FBI to question them with regards to their answers" given to the CBP.

Instances of secondary inspection are "so widespread that unfortunately we can say they are commonplace in regards to the American Muslim community", Shibly said.

Earlier this week, Shibly shared a "critical message" with Muslim Americans that urged them to "refuse to answer" any questions in secondary inspection to prevent rights breaches.

CAIR has filed 10 legal complaints related to the matter and is preparing a nationwide legal challenge.