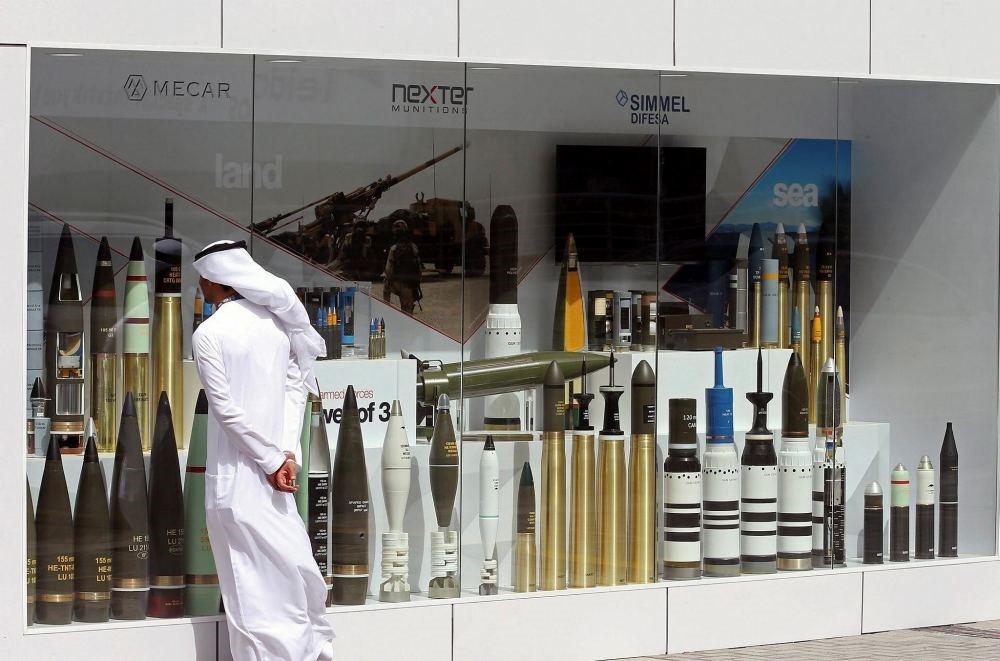 A visitor looks at munitions on display during the International Defense Exhibition and Conference (IDEX) in Abu Dhabi, United Arab Emirates, Feb. 19.
by Yusuf Selman İnanç Feb 22, 2017 12:00 am

The United Nations Security Council members have cemented their positions as key players in the global arms market as Middle Eastern countries double arms imports over the last five years, with sales reaching highest point since the Cold War

Global arms trade has hit highest levels since the Cold War era as the Middle Eastern countries doubled their arms imports over the past five years, an annual report on weapons trade revealed.

The Stockholm International Peace Research Institute (SIPRI) on Monday published the report, which revealed that Western countries were selling huge amounts of weapons to less developed Middle Eastern countries, which are in endless fights and conflicts. The five biggest exporters, the United States, Russia, China, France and Germany, together accounted for 74 percent of the total volume of arms exports while the biggest importers were non-European countries. India, which has been making large investments on security and military sectors, was the biggest importer. Saudi Arabia came in second due to its ongoing war in Yemen.

The statistics showed an increase on the armament of less developed countries.

"With no regional arms control instruments in place, states in Asia continue to expand their arsenals," said Siemon Wezeman, Senior Researcher with the SIPRI Arms and Military Expenditure Programme.

"While China is increasingly able to substitute arms imports with indigenous products, India remains dependent on weapons technology from many willing suppliers, including Russia, the U.S., European states, Israel and South Korea," he added.

An exceptional rise in arms importation was observed in the Middle East.

"Over the past five years, most states in the Middle East have turned primarily to the U.S. and Europe in their accelerated pursuit of advanced military capabilities," said Pieter Wezeman, another senior researcher at SIPRI.

A previous report by SIPRI had revealed that the permanent members of the United Nations Security Council (UNSC), which holds veto power, are single-handedly dominating the global arms market.

Domination of the arms sales market by the U.S., U.K., Russian and French corporations raised questions about the U.N.'s ability to keep peace around the world with the world's top arms-selling nations placed at the organization's power core. These countries were also directly involved in wars and conflicts in the Middle East, and U.S. and Russian-made weapons were being used in some of the deadliest conflicts around the world, including Syria.

Turkish President Recep Tayyip Erdoğan, in an interview with Israeli Channel 2 last December said that Daesh was using weapons made in the West, the Syrian regime was using Russian weapons, while opposition groups and the PKK's Syrian offshoot, the Democratic Union Party (PYD), mostly use U.S.-made weapons.

The report, for instance, without sighting any reason, claimed that Russian exports increased by 6.2 percent in 2014, which leads to a logical question as to whether the Syrian war had an impact on the increase.

A 2014 report released by Conflict Armament Research said Daesh militants were using various weapons manufactured by several countries, including the U.S., China and Russia. The report noted that almost 20 percent of the cartridges cataloged could be traced to U.S. manufacturers.

The report also pointed out that Daesh uses ammunition manufactured in Russia under the Wolf brand and distributed by the U.S. to allied states in the Middle East. It also gives the total number of cartridges documented by country of origin.

According to the report, Daesh had 445 Chinese, 338 Soviet, 323 American and 154 Russian cartridges, while most of the sample ammunition recovered in Iraq was mainly of American origin.

These reports clearly show that the countries, apparently tasked with maintaining world peace through their positions on the U.N. Security Council, were instead stoking the fire of war around the globe with their constant supply of weapons, and this brings about a more important question as to how these countries can contribute to world peace when in fact they are living off wars?
RELATED TOPICS