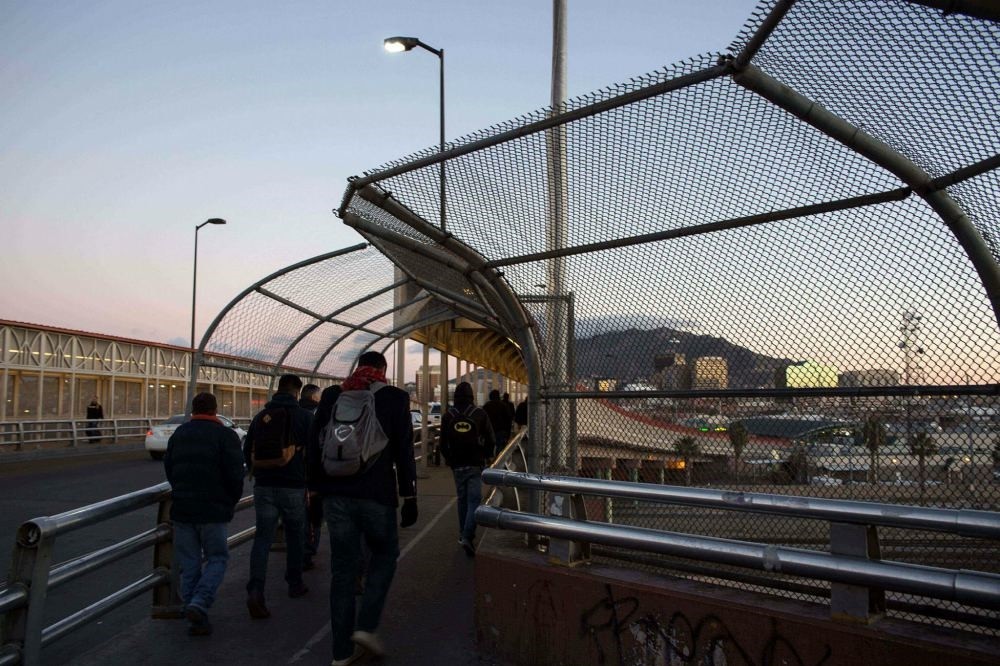 People walk to the United States at El Paso del Norte International Bridge on the U.S.-Mexico border in Ciudad Juarez, on Feb. 20.
by Compiled from Wire Services Feb 23, 2017 12:00 am

As a sharp shift in U.S. immigration laws, the Department of Homeland Security (DHS) outlined efforts to crack down on undocumented immigrants, including a ramping up of detentions and potential deportations

Many more people living in the United States illegally could face rapid deportation — including people simply arrested for traffic violations — under a sweeping rewrite of U.S. immigration enforcement policies announced Tuesday by the Trump administration.

Any immigrant who is in the country illegally and is charged or convicted of any offense, or even suspected of a crime, will now be an enforcement priority, according to Homeland Security Department memos signed by Secretary John Kelly. That could include people arrested for shoplifting or minor offenses.

Rights groups labelled the move a "witch hunt", warning that a threatened "mass deportation" would damage families with deep roots in the United States and hurt the economy.

But John Kelly, the secretary of the Department of Homeland Security (DHS) who issued the new orders in two memos, said they were necessary to address a problem that has "overwhelmed" government resources.

"The surge of illegal immigration at the southern border has overwhelmed federal agencies and resources and has created a significant national security vulnerability to the United States," he said in one of the memos.

The memos followed up on President Donald Trump's order, made just after his January 20 inauguration, for authorities to crack down on illegal immigration by tightening enforcement and building a wall along the nearly 2,000 mile (3,145 kilometer) US-Mexico frontier.

In the memos Kelly ordered immediate action to begin planning the wall. He also ordered the hiring of 15,000 more officers for the Customs and Border Protection and Immigration and Customs Enforcement agencies.

The move comes ahead of meetings this week between Kelly and US Secretary of State Rex Tillerson and Mexican President Enrique Pena Nieto in Mexico, in which illegal immigration and border security will be key topics.

Trump's earlier immigration orders, which banned all refugees as well as foreigners from seven Muslim-majority countries, have faced widespread criticism and legal action. A federal appeals court has upheld a temporary halt.

Since at least 2002 that fast deportation effort — which does not require a judge's order — has been used only for immigrants caught within 100 miles of the border, within two weeks of crossing illegally.

The administration also plans to expand immigration jail capacity. Currently Homeland Security has money and space to jail 34,000 immigrants at a time. It's unclear how much an increase would cost, but Congress would have to approve any new spending.

The directives do not affect President Barack Obama's program that has protected more than 750,000 young immigrants from deportation. The Deferred Action for Childhood Arrivals remains in place, though participants could be deported if they commit crimes or otherwise are deemed to be threats to public safety or national security, according to the department. During the campaign Trump vowed to immediately end that program, which he described as illegal amnesty.
Last Update: Feb 23, 2017 1:26 am
RELATED TOPICS