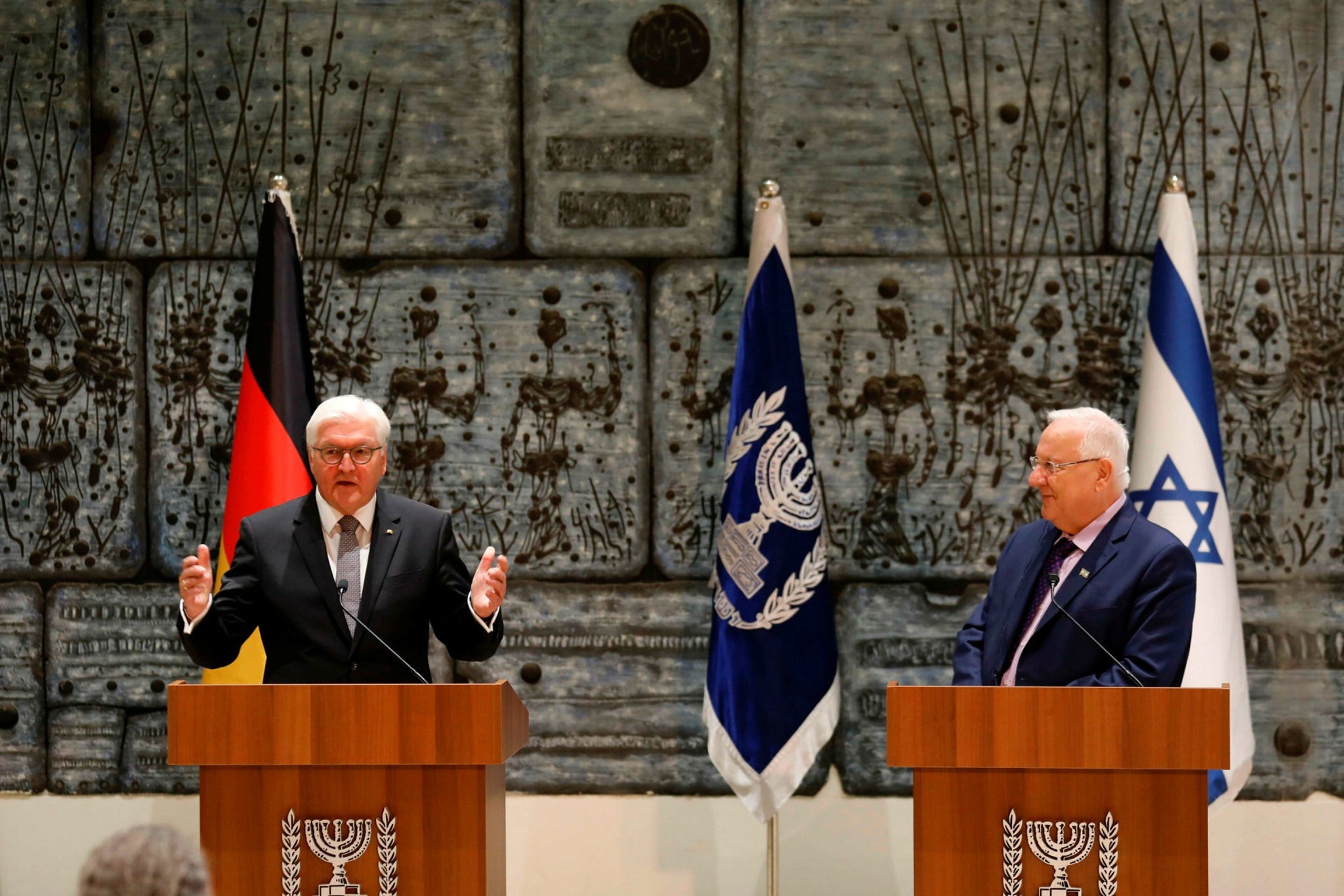 German President Frank-Walter Steinmeier speaks during a press conference with his Israeli counterpart Reuven Rivlin at the presidential compound in Jerusalem on May 7.
by Compiled from Wire Services May 08, 2017 12:00 am

German President Frank-Walter Steinmeier arrived in Israel on Saturday at the start of a three-day trip just days after a row between Germany's foreign minister and Israeli Prime Minister Benjamin Netanyahu.

Steinmeier's four-day visit comes less than two weeks after Prime Minister Netanyahu canceled on German Foreign Minister Sigmar Gabriel at the last minute, further exacerbating tensions. Minister Gabriel had refused to accede to the Israeli prime minister's ultimatum that he had to pick between either meeting with him or with several Israeli human rights' groups that Netanyahu says "slander" Israeli soldiers. The fallout continued last week in an ongoing dispute that has cast a shadow over what would otherwise have been a routine Israel visit by German President Steinmeier. Media reports suggest Steinmeier would praise the group during his Sunday speech but not meet with its representatives to avoid another spat with Netanyahu. Steinmeier's visit to Israel is his first since having taken up the post in March, although he has made the trip before while serving as foreign minister.

The German-Israeli relationship is too crucial to allow a fight over whom visiting delegations are allowed to meet, said German President Steinmeier on his second day in Israel.

"We don't need new rules and we should not impose any limitations" on which civil organizations can be met with, Steinmeier said following yesterday's meeting Israeli President Reuven Rivlin.

A statement from Steinmeier's office said that the president did not wish to increase the rift in bilateral relations but reiterated that he also wished to express German concerns regarding Israel's settlement policy and developments in the Middle East conflict. There were no plans for Steinmeier to meet with the Breaking the Silence and B'Tselem groups, both of which Gabriel met with to Netanyahu's chagrin.

However, Steinmeier did intend to meet with authors Amos Oz and David Grossmann, both of whom are also critical of Israel's settlement policy.

In February, Germany canceled a planned May meeting with the Israeli government, citing scheduling conflicts due to the upcoming German elections, though German Chancellor Angela Merkel's dissatisfaction with the Israeli settlement legalization law was another reason according to Haaretz reports, citing anonymous German and Israeli sources.

Israel has occupied the West Bank for 50 years and the building of Jewish settlements in the Palestinian territory has drawn intense international criticism. Israeli settlements are seen as illegal under international law and are regarded as major stumbling blocks to peace efforts as they are built on land the Palestinians see as part of their future state. Germany has been among the critics of the Israeli settlement policy.

A German government spokesman said in February that a summit with Israel planned for May has been delayed, with Israeli media reporting the delay is due to the Jewish state's controversial new settlements law. Israel passed a law in February that legalizes thousands of settler homes built on private Palestinian land in the West Bank.
RELATED TOPICS