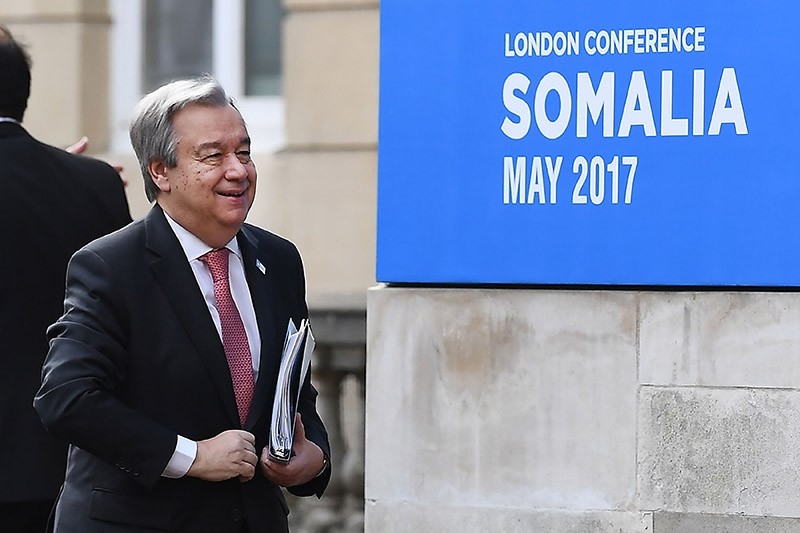 UN secretary general Antu00f3nio Guterres arrives at the London Somalia Conference at Lancaster House in London on May 11, 2017. (AFP Photo)
by Compiled from Wire Services May 11, 2017 12:00 am

The United Nations is seeking a further $900 million this year for Somalia, where more than 6 million people need humanitarian assistance and 275,000 malnourished children are at risk of starvation, Secretary-General Antonio Guterres said on Thursday.

"Somalia now hangs in the balance between peril and potential," Guterres said. "Here in London we can tip the scales from danger to safety."

He said political stability has improved but the gains are fragile in part because "growing food insecurity" is affecting millions of Somalis.

Guterres said some 439,000 people are at risk of famine and more than 6 million are "severely food insecure."

The London conference is co-hosted by the British government, the United Nations and Somalia's U.N.-backed federal government, led by President Mohamed Abdullahi Mohamed, who took office in February after a Western-backed electoral process.

Mired in violent chaos since 1991, Somalia is also suffering the effects of a severe drought that has left parts of the country on the brink of famine.

Somalia is also facing new military interest from the United States, as President Donald Trump has approved expanded operations, including airstrikes, against the terrorist group al-Shabab. Aid agencies have expressed concern that the military moves could endanger the hundreds of thousands of people displaced by the drought.

Somalia also confronts the worst outbreak of cholera in five years, with almost 690 deaths so far this year and cases expected to reach 50,000 by the end of June, the World Health Organization said in a statement Thursday.