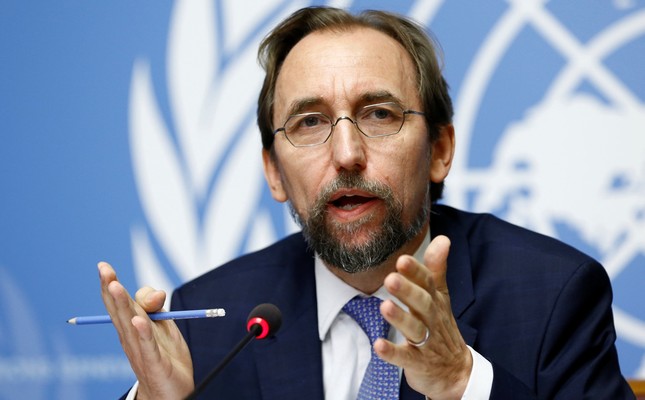 The UN human rights chief said Wednesday that President Donald Trump's relentless attacks on the media could trigger violence against journalists, suggesting the U.S. leader would be responsible.

In a broad condemnation of Trump's conduct in office, Zeid Ra'ad Al Hussein said he viewed the U.S. presidency as the driver of "the bus of humanity", accusing Trump of "reckless driving."

There was no immediate response from the White House on the wide-ranging rebuke of Trump's repeated references to the "fake media" and some of his other statements and decisions.

"It's really quite amazing when you think that freedom of the press, not only sort of a cornerstone of the U.S. Constitution but very much something that the United States defended over the years is now itself under attack from the President," the U.N. High Commissioner for Human Rights said.

"It's sort of a stunning turnaround. And ultimately the sequence is a dangerous one," he told a news conference in Geneva.

Referring to the New York Times, Washington Post and CNN, he added: "To call these news organizations 'fake' does tremendous damage and to refer to individual journalists in this way, I have to ask the question is this not an incitement for others to attack journalists?"

Zeid voiced concern that a journalist from the Guardian had been "assaulted in the United States most recently" but gave no details.

Trump rounded on journalists last week, calling them "truly dishonest people" and criticizing their coverage of a white supremacist-organized rally in Virginia and the political fallout from his comments that violence there was caused by "many sides".

Zeid also made his first public comments decrying racist and anti-Semitic cries by far-right groups in Charlottesville, Virginia, calling the events on its streets "an abomination" and "a nightmare."

He said he didn't initially respond because there was already a "cacophony of noise" in the U.S.

Nazi salutes, swastikas, anti-Semitic slurs and racist references to African-Americans had "no place in the United States or beyond", Zeid said, in his first comments on the events in Charlottesville.

Trump has also made worrying remarks about women, Mexicans and Muslims, "mocked a person with disabilities publicly" and issued a directive on a transgender ban in the military, he said.

"The President prides himself as a taboo breaker, indeed his supporters see him as such. But at the time I expressed my feeling that this was grossly irresponsible, because it has consequences, it emboldens those who may think similarly to sharpen their assaults on these communities," he said.

Zeid voiced deep concern at Trump's pardon of Arpaio, who was convicted of criminal contempt in a racial profiling case that highlighted tensions over immigration policy.

"Does the President support racial profiling, of Latinos in particular, does he support abuse of prisoners? Arpaio referred at one stage to the open-air prison that he set up as a concentration camp, he later recanted said it was a joke," Zeid said. "Does the president support this? These actions have consequences."

Zeid, comparing the leadership role of a U.S. president to a bus driver, said: "I almost feel that the President is driving the bus of humanity and we're careening down a mountain path.

"And in taking these measures, at least from a human rights perspective, it seems to be reckless driving."

Share on Facebook Share on Twitter
Previous in World A Turkish Airlines pilot prevented the deportation of a young Afghan... Next in World At least five people were killed Wednesday by torrential rainfall...
DAILY SABAH RECOMMENDS