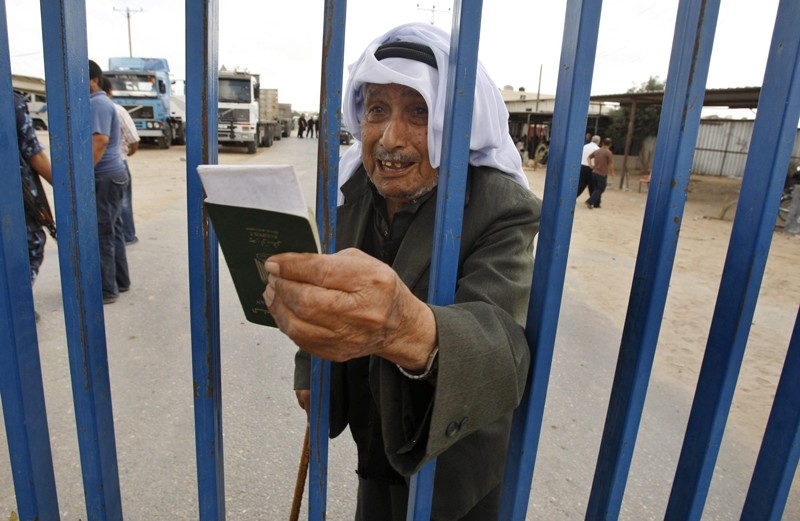 A Palestinian man holds his passport as he waits to cross into Egypt through the Rafah border crossing in the southern Gaza Strip June 27, 2009 ( File Photo)
by Daily Sabah with AP Nov 18, 2017 12:00 am

Gaza's border crossing into Egypt is running under the Palestinian Authority's control for the first time in a decade.

Egypt opened the Rafah crossing point Saturday for three days on a humanitarian basis for the first time since the militant Hamas group ceded control of Gaza's crossings with Israel and Egypt to the Western-backed PA.

The Rafah crossing is the only remaining gateway for Palestinians in Gaza to the outside world after Israel imposed a stifling blockade on the Strip - enforced also by Egypt - a decade ago.

In 2007, Hamas wrested control of Gaza by force provoking an Israeli-Egyptian blockade that severely restricted the movement of most of Gaza's 2 million inhabitants.

Hamas withdrew from the crossings on Nov. 1, implementing the first step of an Egyptian-brokered deal to end the rift with Palestinian President Mahmoud Abbas' Fatah party.

Talks are to resume in Cairo this month to discuss the PA's expansion of its rule over Gaza and broader national issues.

Since 2007, the Gaza Strip has suffered a joint Israeli-Egyptian blockade that has deprived the enclave's roughly 2 million inhabitants of their most basic needs, especially food, fuel, medicine and construction supplies. The Gaza Strip largely depends on foreign aid as the economy has stalled under the Israeli blockade, and apart from small industries, industrialization is almost nonexistent.