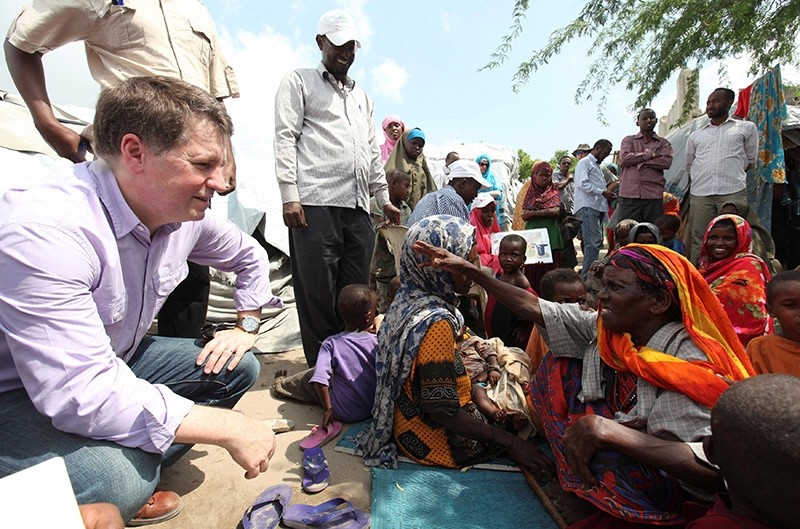 Justin Forsyth (L), Chief Executive of Save the Children UK, talks to internally displaced Somalis at a camp in the Hodan district of Somalia's capital Mogadishu, Nov. 21, 2012. (Reuters Photo)
by French Press Agency - AFP Feb 22, 2018 12:00 am

UNICEF deputy director Justin Forsyth on Thursday resigned from the U.N. children's agency following complaints of inappropriate behavior towards female staff in his previous post as head of British charity Save The Children.

He apologized again for his past "mistakes," but said his decision to step down from the top role was driven by concern that the scandal would hurt both organizations.

"I want to make clear I am not resigning from UNICEF because of the mistakes I made at Save the Children. They were dealt with through a proper process many years ago," he said in a statement.

"I apologized unreservedly at the time and face to face. I apologize again."

"There is no doubt in my mind that some of the coverage around me is not just to [rightly] hold me to account, but also to attempt to do serious damage to our cause and the case for aid."

"I am resigning because of the danger of damaging both UNICEF and Save the Children and our wider cause. Two organizations I truly love and cherish. I can't let this happen."

Forsyth joined UNICEF in 2016 after leaving his post as chief executive officer of Save the Children, where he faced complaints from three workers who said he had sent inappropriate texts and commented on what young female staff were wearing.

UNICEF on Wednesday said it was unaware that Forsyth faced those complaints when he was recruited.

"We are grateful to Mr. Forsyth for his work over the past two years to advocate for the most vulnerable children and help advance UNICEF's mission to save children's lives," it added.

"This mission is now more important than ever."

In the wake of the MeToo movement, U.N. Secretary-General Antonio Guterres this month announced a zero-tolerance policy on sexual harassment and vowed new stepped-up measures to address misconduct by staff at the world body.

A new helpline for U.N. staff will be set up and U.N.-wide rules put in place to ensure that claims are addressed in the same manner throughout the organization.

The complaints at Save The Children follow revelations that Oxfam was investigating 26 cases of sexual misconduct since a crisis erupted over its handling of a scandal involving prostitution in Haiti.

Three of Oxfam's senior leaders have apologized for the charity's handling of an internal investigation into the use of prostitutes by staff in Haiti following the devastating 2010 earthquake.